The Fourth District of Chicago is rather new to the Chicago land made up largely of Hispanics and Latinos. This District like many others face major problems of crime, health care and education. Democratic representative Luis V. Gutierrez represents the answer to these and other problems. Who is Luis Gutierrez? Is this man making a difference? What are his issues? Is Luis doing his job? What is his impact on the system? These are question that need answering. These problems need solving is Luis Gutierrez really the answer?

Gutierrez was born December 10 1954, in Chicago Illinois. He received a Bachelor’s degree from Northeastern Illinois University, in 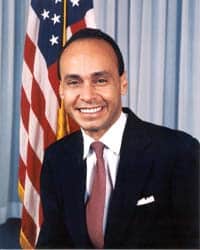 Luis Gutierrez started the road to politics by being a strong supporter on our former late mayor Harold Washington. With the backing of Washington, Gutierrez won the race for Alderman in 1986. After the death of Washington, Gutierrez soon supported Richard Daley for mayor and was appointed to chairman of the housing committee. Gutierrez was now able to instate his “New Homes for Chicago plan”. This plan called for the city to sell empty spaces of land to housing contractors to construct homes for as little as one dollar.

In 1992, Gutierrez ran for representative of the fourth district election, Gutierrez opponent was Juan Soliz. During the campaign Gutierrez focused more on crime, while Soliz focused on many issues such as: trade and health care. Gutierrez soon showed to be the candidate for his people of all ethnic groups. He became known in the area for the following passage, “If you work hard, sweat and toil and play by the rules, you will be rewarded…with clean street, safer and better schools, the opportunity to send your kids to college.” He won sixty percent to forty percent and sixty-four percent to thirty-four percent in the primary. In the district, Gutierrez is well respected, he has been running various programs to better the fourth district such as

A little history of how district four came about; District four is made up primarily of Hispanic Americans. There was once a problem with congressional district. It was meant to have its majority Hispanic but, since the south side Mexican-Americans and the north side Puerto Rican-Americans, were separated by the west side African-American communities, Hispanics were not the majority. In order to fix this problem, the Latin communities became the seventh district. Hispanics in this district are two thirds of the population. Mexicans out number Puerto Ricans two to one. Although Hispanics are the majority only thirty-nine percent are registered to vote while, fifty-eight percent of white are registered.

As of 1990 District four had a population of 571,162 people. Eight percent were African-American; three percent were Asian; sixty-four percent Hispanic; fifty-nine percent were white and forty percent were of other ethnic groups. There were 383,285 people eligible to vote. Fifty-eight Hispanic; six percent African-American; twenty-four percent had college education’s; forty-nine percent married and thirty- one percent married with children. The average rent was 393 dollars a month. The cost of housing is relatively low in this area. The average value of a home was 64,300 dollars

Since the people in Gutierrez district lacked college education according the Ross text book, they are less likely to vote. Gutierrez 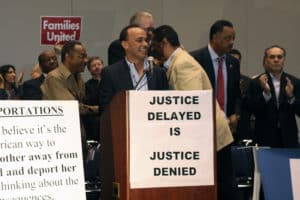 chose a clear cut campaign “Anti-crime”. The use of one major topic enabled him to gain the votes of people who do to lack of education, would not have voted. Another reason for the success of Gutierrez’s anti-crime campaign was because of the fact that in the center of the district is low income housing (projects) that are highly associated with crime and violence. One of the major concerns of the residents in the fourth district is violence. Therefore, his campaign lead voters to believe that if he were to be elected, crime would lesson in there surrounding.

dollars. Approximately one hundred and ninety thousand dollars were given by political action committee. The three major contributors to his campaign were labor unions who gave 109,650 dollars; finance, insurance and real estate. Since he was on the banking committee, bankers backed him on his re-election.

Public funding for health services, gun control and abortion are the three most controversial issues in politics, Gutierrez is primarily pro-choice. A bill was brought to congress on July 17, 1996 to allow federal employees health insurance program to cover abortion, Gutierrez voted, yes to this bill but this amendment was rejected. He supports the Brady bill as well as other topic bills preventing semi-automatic weapons. Gutierrez major campaign topic for 1992’s election. He is primarily for better health care service throughout America.