Cardinal Joseph Bernardin was born on April 2,1928, in Columbia, South Carolina. He was son of Mrs. Marie M. Simon Bernardin, and the late Joseph Bernardin. Cardinal Bernardin attended Catholic and public schools and the University of South Carolina in Columbia. He was later accepted as a candidate for the priesthood by Most Rev. John J. Russell, then Bishop of Charleston. He studied at the following Colleges: St.Mary’s, St. Mary, Kentucky, St.Mary Seminary, Baltimore, Maryland, where he received the Bachelor of Arts degree in philosophy. He also attended the Catholic University of America, Washington D.C. where he received the Master of Arts degree in Education in 1952.

He was ordained to the priesthood by Bishop John J. Russell on April 26,1952, in St. Joseph Church, Columbia. His administrative skills were 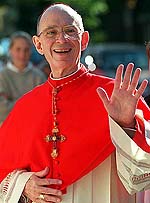 immediately recognized. During his 14 years in the Diocese of Charleston, he served under four bishops in many capacities, including the officed of chancellor, vicar general, diocesan consular, and administrator of the diocese. On March 9,1966, Pope Paul VI appointed Msgr. Bernardin Auxiliary Bishop of Atlanta. In doing this he became the youngest Bishop in the county. On July 10,1982, Pope John Paul II reappointed Archbishop Bernardin to Archbishop of Chicago. His installation took at Holy Name Cathedral on August 25,1982. Later Archbishop Bernardin went to the College of Cardinals. On February 2,1983 he received his “red hat.”       On September 9,1996 President Clinton awarded Cardinal Bernardin the Presidential Medal of Freedom. In presenting the Metal, the President cited Cardinal Bernardin’s work on behalf of racial equality and arms control and noted he “has been a persistent voice for moderation.” Cardinal Bernardin was Chancellor of the Catholic Extension Society and the University of St. Mary of the Lake,Mundelein,IL.

He is a founding member and Vice-Chairman of the Religious Alliance Against Pornography. In the more recent years before his death, he was a member of the Catholic Charities USA National Development Task Force and the Board of Trustees of the Catholic Health Association as well as chairman of the ad hoc Committee on the Structure and function of the NCCB/USCC.    Cardinal Bernardin received numerous honorary doctorates from colleges and universities in the US and Europe. Cardinal Bernardin’s extensive writings open a variety of topics, religious, moral and social. One of these is the famous and challenging Consistent Ethic of Life, a collection of ten major addresses on the topic of the “Consistent Ethic.”