In the play “Henry the fourth” written by William Shakespeare is triumphant and denial.  There is a prince named Hal that does not act like a prince that you think a prince would and fat man named Falstaff  that is his friend.  In this play we see that the prince changes when his father and his country need him from a hooligan of a prince to a prince that is tough and noble.  I will show in steps how prince Hal turns from “Pal Hal” to “Sweet hope”.

In the starting of the play we see that the prince is a “playboy”.  He does not act princely.  He is always drinking and having fun with his 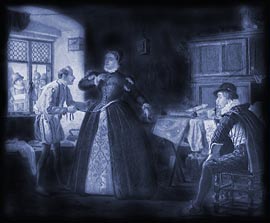 friends.  At this point Hal does not really care that he is going to be the next ruler of his country so he just has fun.  He loves his friends.  He likes their companionship and the way they act.  He knows they use him to pay for drinks and get them out of trouble sometimes but that does not really bother him.  His best friend would have to be the fat old slob Falstaf.  Falstaf is always around in the story and talks all of the time.  He also spends most of his time drinking in the tavern.  Hal likes to hang out with Falstaf because he is funny and outspoken.  Hal and Falstaf could make fun of each other and call each other names and that wont bother them.  For instance when the prince started calling Falstaf, “This bed-presser, this horse-back-breaker, this huge hill of flesh”.  Then Falstaf came back by saying, “Sblood, you starveling, you eel-skin, you dried neat’s- tongue, you bull’s pizzle, you stock-fish,–O for breath to utter what is like thee!-you tailor’s-yard, you sheath, you bow-case, you vile standing tuck!”(Act 2,2,245-251).  All this just slipped of there backs like it didn’t even happen.  Hal likes having fun.  An example of this was when Hal and Poins stole money from Falstaf and friends after they robbed a couple of travelers.  Hal and Poins did this because they wanted to see what Falstaf and company would say when they came back to the bar.  They wanted to see the kind of stories that they would make up.  And that did happen.  Falstaf made a whole range of stories always changing.  One story was that a whole army attacked them and tried to fight them off but Falstaf and friends could not do it.  Another story was that Falstaf knew it was Prince Hal and Poins so he just let them go without hurting them.  Another way the prince had fun was when Hal and Poins would keep on calling Francis making him walk back and forth making him look dumb.  This is why the people would call the prince “Pal Hal”.

Then one day the King of England had a talk with his son and Prince Hal realized.  He had to change.  The king told him about himself when he was younger when he competed for the throne against King Richard the second.  The king then told Hal that if he does not shape up Hotspur might one day win the respect of the people and become king.  So now Hal knew what he had to do.  He had to stop fooling around and beef up his reputation of a prince.  And that’s exactly what he did.  He went to the tavern less and went to meetings that his father called.  He even took charge of an army during the civil war against Hotspur, Glendower, and Mortimer.  Now the people realized that there once “Pal Hal” is now a “Sweet hope”.

So now during the civil war Prince Hal is now the new hope of England.  The people love him and the enemy is becoming frightened they are going to lose.  Then on the battlefield Douglas finds the king and starts to fight with him to the death.  But England’s new “Sweet hope” jumps in and saves his fathers life.  Then after the king leaves Hotspur finds the prince.  Hotspur says, “If I mistake not, thou art Harry Monmouth”(Act 5,4,58).  Then the prince replies by saying, “Thou speak’st as if I would deny my name”(Act5,4,59).  They then fight to the death and Hotspur loses.  Hal has won his own battle by beating his long time enemy but losing one of his best friends Falstaf.  This shows that he is parting with the partying and games and is now going to have to work.

So I guess now you could see how noble Hal has changed from a hooligan to a rolemodel.  He is now a real prince instead of the bar fly that he once was we he hung around with Falstaf and the poor.  He is now fit to rule when his father dies.