Shakespeare uses many motifs to expand on the themes of the story. His most-used motif revolves around filial responsibility. Each of the two plots contains characters who betray their fathers. Goneril and Regan flatter their father, King Lear, and then betray him. The drastic change that occurred in their attitude towards their father is clearly evident through Goneril’s speech before:

“Sir, I love you more than words can wield the matter;

Dearer than eye-sight, space, and liberty;

Beyond what can be valued, rich or rare;

No less than life, with grace, health, beauty, honour;

As much as child e’er loved, or father found;

A love that makes breath poor, and speech unable;

and after she had been allotted one half of the kingdom:

“‘Tis his own blame; hath put himself from rest,

They both were interested only in getting Lear’s land, and used any means necessary to get it. Edmund, in the other plot of the play, deceives 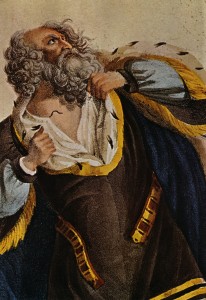 his father in order to gain his favor. Edmund, the Earl of Gloucester’s bastard son, tells his father that Edgar, Gloucester’s legitimate son, is plotting to ruin Gloucester. This causes the Earl to banish Edgar and give his title and land to Edmund.

The ironic misuse of power used by the Earl of Gloucester shows up in both plots. Gloucester punishes Edgar and later finds that Edmund was the one taking advantage of him. Similarly, Regan and Goneril gain Lear’s favor, while Cordelia is left ‘dowerless’ and banished from the kingdom. In the end, though, Cordelia saves Lear from the betrayal of Goneril and Regan.

Shakespeare develops these major motifs with supporting motifs. He describes how revenge can affect families and create problems for the characters. He also uses the senility associated with old age to justify the irrational actions of both Gloucester and Lear. Gloucester, deceived by Edmund, becomes paranoid of Edgar. Lear is portrayed as senile form the beginning when he splits his kingdom between his daughters. He becomes so engrossed by Goneril’s and Regan’s flattery that when Cordelia refused to cater to his wishes, he banishes her in a fit of rage.

Using the various motifs, Shakespeare makes many thematic statements about filial responsibility. Without scrutiny, many children will become overtaken by greed and attempt to get their parents’ wealth by any means. Some children will remain good at heart, but it is difficult to predict which children will honor their parents. This is shown in both plots of the story, with King Lear and Gloucester trusting, and being deceived by, the “bad seeds.” Lear learns of his troubles after both Goneril and Regan throw him out, but Gloucester understands the betrayal of Edmund much later.

The other major theme in King Lear deals with appearances. Shakespeare states, as he does in many of his plays, that appearances can be deceiving. Many people put up false fronts in order to get what they want, including Regan’s and Goneril’s flattery. Once again, one must be careful not to fall victim to others’ false actions. Shakespeare emphasizes the need to think about actions that may have serious consequences, and not to rush into anything. Irrational behavior and gullibility cause many of the problems and conflicts in King Lear.