The Great war killed around 20 million people. The majority of these people were male soldiers between the ages of 18-50. On top of 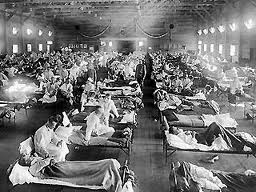 those deaths many soldiers were wounded and shipped to safer areas for recovery. They had come straight from the trenches in the worst possible conditions. Within the trenches rats had grown to enormous sizes and diseases began to mutate. A new and deadly disease sprang up. It was named the Spanish flu because the most high profile case of the disease was the King of Spain. This disease was spread by troops returning home and accelerated with the end of the war. Many people all over the world caught the disease and we used to believe that 20 million died from it. Research in the early part of the 21st century revealed that India was hit far harder than originally believed. In India alone it appears that at least 20 million died from the flu which doubles the death toll to over 40 million.  50 thousand Canadians died and the most effected age group was between 20-40 years old. Some notable survivors include Cartoonist Walt Disney, British prime minister David Lloyd George, Willhelm II of Germany, Painter Edvard Munch. Even though the Spanish flu is very similar in structure to H1N1 there is still no known cure.