Mother Drexel had started out by giving direct service to fulfill the immediate needs of the less fortunate. She later began to see that 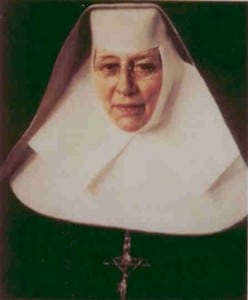 donating money alone was not enough to help the poor. Giving money to the poor didn’t go to the root of the problem. Mother Drexel had begun giving more of herself. In 1891, she started the Sisters of the Blessed Sacrament. Mother Drexel founded a religious order for women, which was dedicated to helping the poor Native Americans and African Americans. Along with setting up a religious order, she founded schools and missions in the South and West of the United States. The Sisters of the Blessed Sacrament have grown and have missions in eleven states as well as in Haiti.

Mother Drexel had continued to be an active worker until she reached her seventies. Because of serious health problems, Mother Drexel could no longer go out and work. Instead she lived in the SBS motherhouse where she spent time praying and reflecting. In 1988, Pope John Paul II gave Katharine Drexel the title of “Blessed” after Robert Gutherman had been cured of hearing loss after his family prayed to Mother Drexel. Also in January of 2000, the Pope John Paul II had reported that Amy Wall, a young girl had been cured of her deafness after prayers were made to Mother Drexel. Mother Katharine Drexel’s feast day is on March 3./ On October 1, 2000 Mother Katharine had been canonized. Her body was laid at the Saint Katharine Drexel Shrine in Bensalem, Pennsylvania.