Only in a time when the pressure of the world amounts to angst and the fight for freedom can a world advance in it’s literary achievements. A writer, just like an artist, builds his creations from the mood and settings of the surrounding atmosphere. In the first half of the twentieth century, the atmosphere was filled with resources to stimulate literary creativity, such as the second World War and the Great Depression (Roache 102: 14). 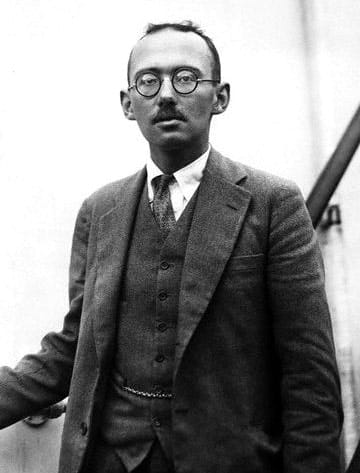 themes (Folsom 3: 953). Of course, the past would remain a constant influence. Some common topics were the Civil War and the settlement of western U.S. frontier life (Magill 1: 174). Stephen Vincent Benet took all these factors into mind during his life as a twentieth century writer/poet. Keeping the times, the life, and the literature of Stephen Vincent Benet a major part of his influence and achievements, he helped push America towards a united cultural victory. Stephen Vincent Benet was born in Bethlehem, Pennsylvania to James Walker Benet, a career military officer, and Francis Neill Rose Benet on the twenty-second of July 1898 (Roache 102: 11, 13). He described himself as a positive-thinking and modest man, who is thin, attractive, vivacious, whereas his wife and his mother-in-law would consider him a plain, tall, large biter-of- nails who carries a foolish expression, but whose intellect is too much for words (Parsekian 1).

He couldn’t have been too foolish of a person due to his positive upbringing. Benet’s parents planned for him to be a success in whatever he chose to do. Their open-mindedness encouraged him to explore books and ideas in a professional state., as well as to appreciate and take literature and history very seriously (Roache 102: 13). Because of this upbringing, all three Benet children became poets and authors. (Stephen Vincent Benet was the youngest of them.) Much influence over the Benets came from love for the country because James’ military work called for traveling between Georgia, California, Illinois, New York, and Pennsylvania (Griffith 11).  Benet’s education shows how successful he really was. He entered Yale University at 17 years old, when he published his first book. About that time, he became professional with New York writers (Roache 102: 13). Stephen Vincent Benet earned his Bachelor of Arts degree in 1919 and his Master of Arts degree in 1920 at Yale before accepting a fellowship to Paris where he could live cheaply and write his first novel and would later find his wife. One attempt to enlist in the army and follow in the footsteps of his father failed in 1918, leading him to a job working for the State Department in Washington, DC before re-entering Yale (Magill 1: 171). In 1929, Benet was entered into the National Institute of Arts and Letters in 1938, which he stayed a member of until his death (Folsom 3: 954).

While in Yale, Benet held many other jobs such as editor, contributor, and chairman of the Yale Literary Magazine, then editor and contributor of the undergraduate humor magazine Yale Record. These jobs gave way to him working on S4N, a New Haven magazine of poetry. In 1919, Benet published the play of Christopher Marlowe’s Tamburlains the Great (1590) with Monty Wooley by Yale University Press. In 1920, he published Heavens and Earth as his thesis during his graduate study in England by Holt (Griffith 12). Other editorial jobs include reviewing for the New York Herald Tribune and the Saturday Review of Literature, and the Yale Series of Younger Poets competition in 1933 (Magill 1: 71). In 1945, Benet published a collection of radio scripts called We Stand United, and Other Radio Scripts as a propagandistic war effort that he felt was his destiny (Magill 1: 170). Another destiny was marriage. He married Rosemary Carr on November 26, 1921 through the fellowship to Paris in 1920. They started living in Chicago, then Paris, Hollywood, and New York (Roache 102: 13). She was an unpretentious only child who never said mean things to anyone (Parsekian 1). She gave him three children: Stephani Jane (1924), Thomas Carr (1925), and Rachel (1931) (Magill 1: 172).

Benet has always been a popular person by large. He was more widely read than Frost, Eliot, and many classical writers. Every lecture hall and poetry workshop wanted him as a guest and his books sold tens of thousands (Griffith 11). In July 1929, John Brown’s Body won the Pulitzer Prize and “The Devil and Daniel Webster” won the O. Henry Memorial Award (Roache 102: 14). “King David” got The Nation’s poetry prize in 1923 when he was only 25 years old, the Theodore Roosevelt Medal for literary accomplishment was given to him in 1933, and he received the Gold Medal for Literature from the National Institute of Arts and Letters with another Pulitzer Prize for Western Star before his death.            Stephen Vincent Benet had a stroke of bad health between 1930 to 1943 with arthritis of the spine and other illnesses. Overwork caused hospitalization in 1939 by a nervous breakdown. At 44 on March 13, 1943, he was announced dead by a heart attack (Magill 1: 171-172). He was buried (later with his wife and older daughter) in Main Street cemetery in Stenington (Parsekian 1).

The literature of Stephen Vincent Benet has and always will be seen as some of the greatest literary and artistic works ever created. His short 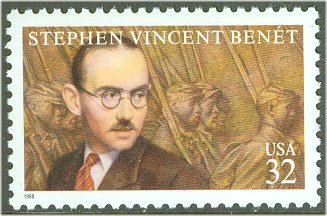 stories turned people on due to the straight-forward manner they were presented in and the availability for significant relevance to self-revelation. His writings could enrapture a reader like no other (Folsom 3: 953). His short stories recognized “both bitter and the sweet” such as in “A Death In the County” where a man learns that his past can help his present (Roache 102: 17). His poems are popular because they portray traditions realistically and the patriotism of them is outstanding. Charles A. Fenton said Benet “wrote short stories for money and poetry for love” as a witness to the revelation his writings hold (Roache 102: 13, 18).

The styles of Benet’s short stories were showing lots of symbolism and humor to deepen the stories. He also used a historical base to portray realism and have a propagandistic overview. He individualizes the people through speaking without distracting the reader. He also paralleled bible stories and parables to symbolize slaves winning freedom in “Freedom’s a Hard-Bought Thing.” The content of his stories are mainly patriotic as well as what the common man of the present time wants and went only as far as his money needs went (Folsom 3: 956-957). In “Johnnie Pye and the Fool-Killer,” Benet begins in direct voice as the narrator, then runs into a mass of dialect (34). The theme of that short story is the everlasting existence of youth and naïve predictions (Benet 34). Benet’s themes ranged from ideological concerns in “Fantasies and Prophesies” to human reality in “The Devil and Daniel Webster” or tragicomic ironies in “A Story By Angela Poe” (Roache 102: 14).

Poetry was a completely other thing. Benet’s style consisted of local humor and short phrases such as in “The Mountain Whippoorwill” (Griffith 13). In John Brown’s Body, the content of poetry remains the same as in short stories. He was a historically brought up person who reflected his past in historical writing and poetry. The theme of Benet’s poetry ranged widely. The most successful poem is the novel-length John Brown’s Body, whose theme is American victory. Being paid for at such a high level, this poem had been well worth it’s wait. He won a Pulitzer Prize for it and gave his personal version of history center stage (Magill 1: 170,174).

Stephen Vincent Benet wrote books as well as poems, radio scripts, and plays. His editing and contributions to American literature and his family of Americans may have been a bigger gift than anyone could ever receive. Knowledge is the power Benet used and it was the power that gave American literature the victory of achieving such high standards. So, if the times, the life, and the literature of Stephen Vincent Benet are as strong in leadership and knowledge as an American force, then the country has won a victory for its poetry and prose.