Although he is almost unknown during his brief lifetime, Vincent Willem van Gogh, was born Mar. 30, 1853, in Groot-Zundert, the Netherlands and is today probably the most known and appreciated representative of art. His work became an important bridge between the 19th and 20th centuries; and it was particularly influential. Van Gogh clearly showed artistic talent even as a child, but neither he nor his family imagined that painting would become his career. Instead, at the age of 16, he went to work for Goupil and Company, an art gallery with which one of his uncles had long been associated with; he was dismissed in 1876. Other false starts included a job in a Dordrecht bookstore during the spring of 1877, theological studies at the University of Amsterdam, and from November 1878 to July 1879, service as a lay missionary in a coal-mining district in Belgium.

In 1880, Vincent chose art as a vocation and became dependent on his brother for cash. Indeed, for the next 10 years Theo, who had also gone 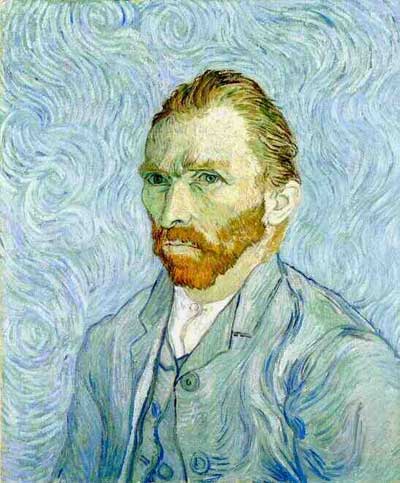 to work for Goupil, sent an allowance to Vincent, encouraged him to work, and wrote regularly. Vincent’s thinking during his short career (approximately 750 paintings, 1,600 drawings, 9 lithographs, and 1 etching) was documented in more than 700 letters that he wrote to Theo and others. Van Gogh’s early years includes all his work from 1879 through 1885. Between August 1879 and November 1885 he worked in Etten, The Hague–where he received some instruction from his cousin, Anton Mauve and in Nuenen, among other places. In Nuenen he painted The Potato Eaters, his first important picture, which underscores his lifelong interest in peasant subjects. During the winter of 1885-86 Van Gogh studied at the academy in Antwerp, where he was forced to draw from plaster casts and to adopt academic principles that did not suit him. He moved to Paris, where he lived with Theo his brother. The Paris period (March 1886-February 1888) is extremely important because it enabled Vincent to see and to hear discussed work of virtually every major artist there. Although van Gogh admired many. During these years van Gogh’s style shifted from the darker manner characteristic of his Nuenen period to a postimpressionist style heavily influenced by divisionism . Van Gogh left Paris and moved to Arles in February 1888. His mature work and many of his most famous paintings date from the ensuing year. In October 1888, Paul Gauguin came to live and work with van Gogh.

After only 2 months, however, following the first of Vincent’s attacks of dementia, he punished himself for trying to stab a close friend Gauguin in which he amputated his own earlobe, Gauguin left, having first summoned Theo from Paris. Thereafter, Vincent was hospitalized until the spring of 1890; he was voluntarily confined in the Asylum of Saint-Paul in Saint-Remy from May 1889 until May 1890. He continued to paint, however, and in June 1889 executed the Starry Night and the extraordinary Self-Portrait (Louvre). In the three months following his release from the hospital in May 1890, at the village of Auvers-sur-Oise outside of Paris, Vincent produced many great pieces of work including the Portrait of Dr. Gachet ,Field under Thunderclouds, and the famous Crows in the Wheatfields  Although Vincent had finally begun to receive critical praise, he shot himself while he was in a mental hospital on July 27, 1890, and died two days later. His grief- stricken brother died only six months after.