After the Exodus from slavery in Egypt, the wandering Jews lived in tents or booths, called Sukkots. They were pitched wherever they happened to stop for the night. Today it is called the Sukkot the festival of booths remembering both the ancient agricultural booths and those of the Exodus. The harvest festival of thanksgiving, Sukkot, begins five days after Yom Kippur, and lasts for eight days. The first two days are the most holy, during which most Jews do not work. The families construct the booths and decorate it with branches, and leaves, fruits, and other designs.

The roof is covered lightly, so the stars and the sky can still be seen. Most Jewish families eat all their meals in the Sukkot, while some 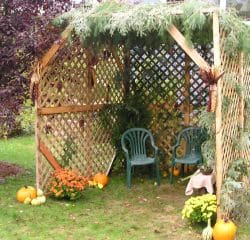 even sleep in them. During the Sukkot festival, thanks are given for all growing plants by using four plants which are symbolic of all the rest. These four plants also represent the Jewish people. The Etrog, or the citrus fruit, stands for the people who are educated in the Torah and who do good deeds. The Lulav, or branch of the date palm, stands for the Jewish people who have knowledge but no good deeds. The Hadas,or myrtle, symbolizes the people who do good deeds, but are not educated. The Aravah, or willow, stands for the people who have no good deeds and no education. These plants are carried around the synagogue in a procession while prayers are recited for blessings on the land and fruit of Israel. In biblical times, the willow, the palm, and the Etrog were used in decorating the Sukkot.

At the end of the Autumn harvest, on the fifteenth day of Tishri (September-October) Sukkot is celebrated. It is believed that the festival originated with the ancient Canaanite celebration after the grape harvest at the end of the annual dry season. During this time rites were performed to in courage the rains. Boughs of fruit trees and evergreens were made into little booths which the early Jewish farmers lived during the festival.   The last day of Sukkot is called Simhat Torah. It means the “rejoicing of the Torah.” On this day, the reading of the Torah is completed, and is then immediately begun again. This symbolizes the fact that the study of the Torah has no beginning and no end. Children are given the honor of being called to read the Torah alongside their elders. Generally only adults are called up to the Torah. In a series of seven processions around the synagogue, called Hakafot, the rabbi leads the congregation carrying the Torah. The procession goes seven times around in honor of Abraham, Isaac, Jacob, Moses, Aaron, Joseph, and David.