The Mosquito Coast depicts the story of an unstable, antisocial individual whose unsubstantial paranoia causes him to dramatically alter the courses of his and other people’s lives. The man’s continual fear of a nuclear invasion by an irate, immoral country eventually this man to move himself and his family to a remote jungle area of Honduras where he planned to establish a utopian society of his own design. Some themes that are conveyed through this story are the ability of split-second decisions to dramatically alter anybody’s life, and the inability of certain individuals to be able to mentally handle the stressful life of western civilization.

Allie Foxx highly opposed the style of life which had developed in the United States. He believed religions to be useless, and our government to 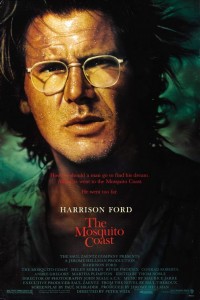 be corrupted, continually drawing the unwanted attention of other countries tactile missiles. He saw TV. and mainstream life as a form of mental poison. He strictly raised his children to incorporate the same mental attitude which he held. He saw himself as the last real man alive. The combination of all these delusions eventually prompted him to relocate himself and his family to a different country altogether, where he whatever lifestyle he so desired. Charley is the thirteen year old son of Allie. He is naive to the practices of modern society because of his father’s continual and insisted sheltering from the evils of everyday life. He is very impressionable and sees his father as the most brilliant man on earth. Jerry is the ten year old younger brother of Charley. He enjoys bettering his brother, and cutting him down. He puts on a guise of valiant bravery, yet inside he is merely a frightened child. Although he immensely respects his brother he is unable to relate these emotions for he views them as feminine. The story begins on a farm in Massachusetts, but quickly shifts to the primitive, remote jungles of Honduras. It all takes place during the early nineteen-eighties. The setting corresponds well with the time period and the main character. This period showed many leaps in technological advancement, which Allie refused to be a part of.

He instead chose to live a simple, sheltered life. And the remotes of Honduras were essential in attaining this type of lifestyle. The dialogue of the natives in the story combined with the effects of the harsh jungle environment make the author sound as if he knows much of the style of life which is typical to the poverty stricken natives of South America. He also seemed fascinated by the effects that unforgiving nature can have on a group of people. This story does an effective job of immediately fascinating you with the unusual attitude of Allie Foxx, and from that point it never lets your attention waver. It also is effective at stimulating emotions as you read. It shows you unusual situations and encourages you to think of how you would handle such a situation.