The play “Violet” takes place in the mid-1960’s and focuses on a young woman in search for a miracle, and who bears a horrendous scar on her face from an accident when she was a child. The musical opens with Violet boarding a Greyhound bus that is traveling to Tulsa, Oklahoma, 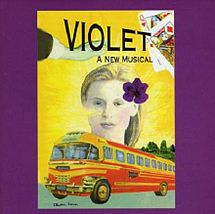 where she hopes to be physically healed by a famous TV preacher. On her journey of self-discovery, she meets several people, including two soldiers, who soon become her friends. As the young adults traveling advances, so does their understanding of many important lessons and choices about life and growing up. Throughout the play, Violet flashes back to her childhood memories, especially those moments with her father, whom she condemns total responsibility for the accident. Ultimately, Violet experiences a form of healing that is truly more important than the physical miracle she was searching for.

The books and lyrics of “Violet” were composed by Brian Crawley and music by Jeanine Tesori. The musical was based on “The Ugliest Pilgrim” written by Doris Betts. The story has its strong and weak aspects. Although an understanding of relationships in a story, much less a musical, can be difficult to portray, were for the most part depicted very well. However, the play failed to represent a fully developed relationship between Violet and Flick, an African-American soldier. The comical moments and witty sarcasm also benefit the story and kept the audience’s interest when a song was not being belted out by one of the talented characters. Furthermore, the flashbacks used throughout the play, although they are important for giving background information, were at times quite confusing and hard to follow.

Scenic designer, F. Nels Anderson, designed the set that included many props located on two sliding platforms from each side of the stage. These platforms, along with other props around the stage, created various locales such as the bus, a nightclub, and a hotel room. A fairly attractive backdrop showing a sky with clouds was also used. Louis Gagliano provided the strong lighting design that included different colors that highlighted the sky backdrop. During cheerful moments the backdrop was lit with warm and bright colors, while dark and gloomy lights projected the background during more somber scenes. The costumes by Greg Horton were, for the most part, appropriate for the time period, although some were quite revealing.

Director Jennifer Jones Cavanaugh portrayed the culture of the 60’s very well. She also handled the scene changes in an effective and smooth manner as best she possibly could, and adequately distinguished between the flashbacks and daydreams in an orderly fashion. However, the most effective staging technique used to portray the plays meaning was the use of projections. Since Violet’s scar was not visually noticeable, Cavanaugh effectively used a projected image of the scar, which hangs above the stage and slides forward as Violet looks at her disfigured face. The audience finally gets a glimpse at the scar and sees it as Violet sees it.

Although “Violet” is a difficult musical to stage, the talented cast proved their vocal abilities very well. On the contrary, several songs seemed 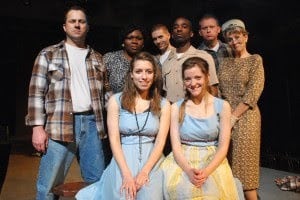 hurried and hard to understand the meaning behind them, which can be problematic since a musical’s songs are meant to be the plots “action.” In other words, the music should tell the story and or the message, and this was the point where the production seemed to fail at the most.

Sarah Jane Johnson and Maggie Joyner each take on the roles of Violet and Young Violet, respectively. There was a remarkable resemblance between these two actresses, which also benefited the production. Johnson displayed a beautiful singing voice that fits the material, but did not convey the complexities of the character very well. The audience should have felt sorry for Violet, but they never really seemed convinced of the characters emotional pain.

Flick, the African-American soldier played by Andrew P. Jackson II, not only brought a soulful voice to the production, but also formed a parallel emphasis to the plays meaning.  Although he does not have a physical scar, the fact that he was a black man in the south during this time period indicates that he knew what it was like to be judged by one’s skin.

Overall, the production as a whole conveyed the meaning of the play as best as it could. The story itself is complicated with so many things going on, which can make staging very difficult. Cavanaugh’s staging choices were satisfactory in presenting the meaning of the play. The projections were extremely helpful in that area.

Although some characters personalities were portrayed better than others, the actors and actresses, overall, did a pleasing job, with the exception of a few songs being rushed.  However, underdeveloped relationships and the flashbacks throughout the play seemed to be unclear and left the audience somewhat confused.