Since the reign of Emperor Justinian in 542 A.D., man has one unwelcome organism along for the ride, Yersinia pestis. This is the bacterium more commonly known as the Black Death, the plague. Plague is divided into three biotypes, each associated with one of three major pandemics occurring in history. Each of these biotypes are then divided into three distinct types, classified by method of infection.

The most widely know is bubonic, an infection of plague that resides in the lymph nodes, causing them to swell. The Black Death of 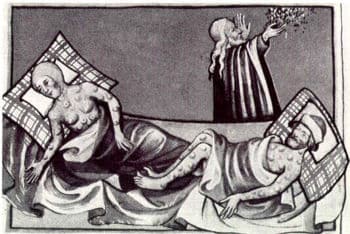 the 14th century was mainly of this type. Bubonic plague is commonly spread through fleas that have made a meal from an infected Rattus rattus. In the American and Canadian west, from Texas and Oklahoma in the east to the Pacific Ocean in the west, it is most often transmitted from species of squirrels. The last occurrence of transmissions from rats to people, or people to people in the United States occurred in 1924 in Los Angeles. In that epidemic there were 32 cases of pneumonic plague with 31 fatalities. Since then there have been around 16 cases a year in the United States, most connected with rock squirrels and its common flea Oropsylla montana.

The most dangerous type of plague is pneumonic. It can be spread through aerosol droplets released through coughs, sneezes, or through fluid contact. It may also become a secondary result of a case of untreated bubonic or septicemic plague. Although not as common as the bubonic strain, it is more deadly. It has an untreated mortality rate on nearly 100%, as compared to 50% untreated mortality for bubonic plague. It attacks the respiratory track, furthering the cycle.

The third type of plague is septemic. It is spread by direct bodily fluid contact. It may also develop as a secondary result of untreated bubonic or pneumonic plague.

As mentioned before, the most known incidence of bubonic plague was in 14th century Europe. In 1346 reports of a terrible pestilence in China, spreading through Mesopotamia and Asia Minor had reached Europe, but caused no concern until two years later. In January of 1348 the plague had reached Marseille in France and Tunis in Africa. By the end of the next year the plague had reached as far as Norway, Scotland, Prussia, Iceland, and Italy. In 1351 the infection had spread to include Russia.

The plague was an equal opportunity killer. In Avignon nine bishops were killed, King Alfonso XI of Castile succumbed, and peasants died wherever they lay. Though the plague had, for the most part, ceased less than ten years after it started, it killed nearly one third of the European population. In many towns the dead outnumbered the living. Bodies piled in the streets faster than nuns, monks, and relatives could bury them. Many bodies were interred in mass graves, overflowing with dead, or dumped into nearby rivers. Domesticated cats and dogs, along with wolves, dug dead out of shallow graves, and sometimes attacked the still living. Many animals did either from plague or lack of care. Henry Knighton noted more than 5,000 dead sheep in one field alone.

The death of a very large portion of the work force aided those that were still living. The sheer scarcity of workers enabled the remainder to make demands of higher wages and better conditions. Farms located on poor soil were abandoned because the demand for grain had decreased, enabling fewer farms, located on the better tracts of land to feed the population.