Tiberius Claudius Nero Caesar was born in Rome on November 16, 42 BC. Four years after his birth his mother divorced his father and married Octavian. Tiberius was a descendant of the Claudian family who moved to Rome shortly after the foundation of the city. The Claudians did not respect others who were not of noble ancestry.

After Tiberius was four he was raised to be a loyal servant of Augustus. Tiberius is associated with Augustus for 22 years. Augustus 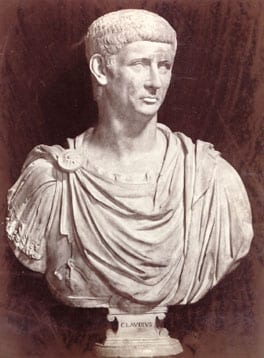 had Tiberius carefully educated. Augustus later forced Tiberius to dissolve his happy marriage to Vipsania Agrippina and marry Augustus’ daughter Julia. This was arranged to better the chance of succession of a descendant of Augustus to take power. The plan did not work because they did not get along and soon lived separately. For this reason Tiberius retired to the island of Rhodes where he devoted himself to study for seven years. When Tiberius returned to Rome in AD 26, Julia had been banished for adultery. The death of both of Augustus’ grandsons within two years led him to adopt Tiberius as his son and heir.

Tiberius then went into active service in northern Germany against the Marcomanni. Tiberius succeeded in securing the northern border with the dangerous German tribes. Tiberius made two more marches into the heart of Germany. On his return to Rome he was awarded a triumph, the highest official tribute that was given to honor a victorious warrior.

Augustus died in AD 14 and Tuberius assumed sole power of the whole Roman empire. Tiberius was a large, strong man, and very tall. He had a fair skin complexion that was sometimes subjected to outbreaks of skin disease. According to Suetonius, he wore his hair long in the back. This was an old fashioned style for the time. Perhaps it was adopted in memory of his distinguished ancestry. Tiberius remained in excellent health most of his life. He was formal in manner but it was reported that he indulged in heavy drinking and sexual activity. He was also well educated in Latin and Greek literature. He also had a strong devotion to astrology.

Tiberius took the throne at the age of fifty-six. This was during the life of Jesus Christ. Although he assumed actual power, he did so unwillingly and refused most of the titles that the senate offered him. Many people believe that Tiberius was reluctant to become an autocrat. Tiberius began to take firm steps against foreign beliefs because he thought they were a threat to traditional Roman values. He expelled followers of the Egyptian and Jewish religions from Rome and banished astrologers. Tiberius believed in astrology himself but probably feared a possible conspiracy inspired by horoscopes.

Tiberius established a central camp for the Praetorian guard in Rome so the military could be quickly called to put down civilian violence. Civilian riots were common because of the large population of unemployed that were provided for by the public dole. Lucius Aelius Sejanus was in charge of these troops and that gave him an enormous amount of potential power. He aspired to marry Livia Julia, Tiberius daughter, and worked to increase the emperor’s fear and distrust of other members of his Tiberius family. In AD 26 Tiberius left Rome and withdrew to Campania, and the following year went to the island of Capri. Tiberius left Rome under the power of Sejanus. Finally realizing that Sejanus was trying to seize the imperial power he sent a carefully worded letter to the senate. The senate read the letter while the unsuspecting Sejanus sat in the senate chamber. Tiberius bitterly condemned Sejanus. Quick action was then taken to execute Sejanus and his family. Incidents such as this one gave Tiberius a bad name with the people of Rome and the senate. Tiberius continued to rule Rome and the empire from the isolation of Capri. Tiberius often confused and baffled the senate with his letters. The senate was frequently unable to interpret his mysterious messages.

Tiberius continued to live at Capri. His character was weakened by years of hard work, worry and intense pressure. According to Suetonius he engaged in a series of perversions. Tiberius grew into a very paranoid and suspicious man. Since he had outlived his son he decided that his nephew Gaius would succeed him. Tiberius died on March 16, AD 37 near Naples. Some believe he was smothered by the prefect of the Praetorian Guard. Instead of mourning there was celebration. His body was not cremated until April 3. Tiberius was not deified during his lifetime or after his death.

People take different sides when reflecting on Tiberius rule. Some believe that on the whole he was a fairly good emperor. He was able to maintain peace at home and security along the borders. Tiberius seems to have been an able soldier and administrator who retained the republican form of government as much as possible. He did improve civil service, the economy and kept the army highly disciplined. Few doubt the fact that after Sejanus death Tiberius became suspicious and vengeful.

Others feel that Tiberius was cruel and a tyrant. Tacitus was one of Tiberius greatest critics. His writings portrayed a completely evil ruler who used unlimited power to destroy his enemies. However Tacitus was a believer in the republic style of rule and hated the empire that replaced it. Tacitus version of history is what most people remember because of his brilliant writings.

Some maintain more of a middle ground when reflecting on his reign. They feel Tiberius had great military and political abilities. He often used these to benefit Rome and provided effective rule for the empire for many years. However the series of plots against him, the hostility of the upper classes, and overwork caused drastic changes in his personality. The job of ruling the entire Roman Empire was too great a job for any one man to handle.