Wilfred Owen is considered by many to be perhaps the best war poet in English, if not world, literature. Yet, at the time of his death on November 4, 1918, only five of his poems had been published. Thus, due to his premature death, it is clear that Wilfred Owen was not responsible for the development of his own reputation.

Instead, it was through the efforts of his editors that Wilfred Owen and his poetry were not forgotten on the bloody fields of France. 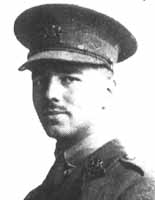 Indeed, I would argue that the three earliest editions of Owen’s poems (Siegfried Sassoon and Edith Sitwell, 1920; Edmund Blunden, 1931; and C. Day Lewis, 1963) were responsible for establishing Owen’s reputation and that reputation was reaffirmed by subsequent editions. This means that in order to understand Wilfred Owen’s position in English literature, one must examine the different editions of Owen=s poems and the agendas of each editor.

The first edition of his poems, co-edited by Sassoon and Sitwell, created problems immediately, as Sitwell and Sassoon argued over control of the project. After the war, Edith Sitwell had begun to prepare the poems for publication; she had even published seven of the poems in Wheels, the magazine she edited, and was preparing to publish more. It was then that Sassoon became involved. Sitwell, in a letter dated 3 October 1919, wrote to Susan Owen (Wilfred’s mother) and told her,

I wrote to Captain Sassoon, to ask him if he could

help me about them. He came to see me; and told me

it would have been your son’s wish that (Sassoon)

should see to the publication of the poems, because

they were such friends. In the circumstances I could do

nothing but offer to hand them over to him (Sitwell: 20).

Then in a letter from late January 1920, Sitwell tells

has suddenly gone off to America, leaving all you (sic)

son’s manuscripts with me to get ready for the printers

by February 1st. Captain Sassoon has done nothing in

the way of preparing them. All he has done in the

matter is to arrange with Chatto and Windus to publish them (23).

Despite Sassoon’s apparent lack of work, he still received the credit as editor. To understand fully Sassoon’s actions, it is necessary to discuss his motives for wanting the poems published.

Sassoon realised that Owen’s work faced the possibility of being forgotten by the larger reading audience because of Owen’s untimely death. This meant that an edition of Owen’s poems had to be published very quickly. Sassoon also recognised that he, as a former soldier and Owen’s friend, could not objectively consider Owen’s poetry, so he left all critical investigation for future critics. He makes this clear in his introduction to the edition:

The discussion of his experiments in assonance and

dissonance…may be left to the professional

critics…The importance of his contribution to the

literature of the War cannot be decided by those who,

like myself, both admired him as a poet and valued him

as a friend. His conclusions about War are so entirely

in accordance with my own that I cannot attempt to

judge his work with any critical detachment (Sassoon v).

This, then, was Sassoon’s main motivation: to get Owen’s poems in print before he was forgotten. He also felt that the poems should be presented to the world by a veteran of the First World War. Thus, in Sassoon’s mind, Sitwell could not introduce Wilfred Owen to the world.

Edmund Blunden’s 1931 edition was intended to add the critical and biographical apparatus that was absent from Sassoon’s edition. In his introduction, Blunden writes that the

sense of his (Owen’s) promise and achievement has

deepened since 1920, and his former editor (Sassoon)

has been conspicuous among those who have urged the

preparation of a new and enlarged volume of Owen’s

poems, with such biographical notice as can and

should be prefixed to them (Blunden 3).

Edmund Blunden was well aware of Sassoon’s motives when he published his own edition:

Twelve years of uneasy peace have passed since the

War, among its final victims, took Wilfred Owen, and

ten since the choice edition of his poems by his friend

Siegfried Sassoon revealed to lovers of poetry and the

humanities how great a glory had departed (Blunden, 3).

Sassoon wanted to show this “glory” in its raw form, and like Sassoon, Blunden felt that the poems needed more critical attention. Unlike Sassoon, Blunden was not a friend of Owen; thus, he was able to distance himself from Owen the person. However, Blunden had been a soldier on the Western front; and, therefore, he was not able to distance himself from Owen the “war poet.” Both Sassoon and Blunden wanted Owen’s poetry to help society understand the nature of the war; they, like other returning soldiers, believed that civilians in England would not, or even could not, comprehend the events that had taken place in France during the war. While this is what Owen had hoped his war poems would do, the way Sassoon and Blunden presented Owen caused subsequent critics to view Wilfred Owen the poet differently: as specifically a war poet. As a result, critics tend to see Owen’s poetry solely in terms of the war and tend to neglect Owen’s poetry in terms of poetic art and literary movements. This is understandable as Owen’s mature poetry was written during and concerned the war.

Just as the war affected Owen’s generation, the war also affected the next generation of writers who either grew up during the war or were born shortly after the war. It is not surprising that, given the upheaval and the social and self-examination caused by the war, Wilfred Owen, who so vividly portrayed the horrors of war, became one of the most read of the war poets. The demand for Owen’s poetry was so great that between 1931 and 1963 Blunden’s edition of Owen’s poems was reprinted nine times. Sassoon and Blunden had succeeded in what they were trying to do; Owen became known and popular as a war poet.

C. Day Lewis’ edition, published in 1963, did for the generation of World War II what Blunden’s edition did for the previous generation: it showed the truth about war. With the perception that there was a lack of a great Second World War poet emerging from the most recent war, there was a demand for an updated edition of Owen’s poems. There was also a critical need for a new edition; after all, there had not been an updated version of Owen’s poems in thirty-two years, only reprintings of Blunden’s edition.

In his introduction, Lewis discusses what Owen’s poetry meant for the generation of the 1930s:

The subject made the poet: the poet made poems

which radically changed our attitude towards war.

The front-line poets who were Owen’s

Blunden, Osbert Sitwell–played a most honorable

part, too, in showing us what modern war was

really like; but it is Owen, I believe, whose

poetry came home deepest to my own generation,

so that we could never again think of war as

anything but a vile, if necessary evil (Lewis 12).

Two things are clear from this passage. The first thing is that Lewis believed that Owen saw war as a “vile, if necessary evil.” It was Lewis’ generation who saw World War Two as a “necessary evil” because of the importance of stopping Hitler and National Socialism. Owen’s war had no Hitler and no Nazi movement. This forced Lewis to recreate Owen’s ideas in order to legitimize the view of Lewis’ generation that war is, at times, a “necessary evil”. Nowhere in Owen’s poetry does he state or imply that war is necessary. For Owen, war was the evil that had to be stopped and was never necessary.

Second, it is clear that Lewis saw Owen strictly as a war poet. Lewis believed that the “subject made the poet.” For him the war was inextricably fused with Owen’s poetry. Owen’s achievement comes not from his technical prowess or his use of the half-rhyme but from his presentation of the war. Owen’s poetry was by this time so associated with the war that it was impossible for Lewis to consider Owen’s work in any way divorced from the war.

What Lewis does in his edition is to reaffirm for a new generation the view of Owen as a poet of the First World War. This view has persisted, limiting appreciation of Owen’s work. There have been attempts to change this view. Jon Stallworthy has published an authoritative edition of Owen’s complete poetry, allowing critics also to consider Owen’s non-war poetry. Dominic Hibberd and Jennifer Breen view Owen’s life more objectively. Breen is quite conscious of what she is doing in her edition of Owen’s poetry and writes, “My brief introductory sketch is an attempt to demythologize the life of ‘Owen the poet'” (Breen 2). Her argument is that not only is the view of Owen’s poetry limited by his achievement in the war, but his biography has suffered the same fate as well.

Sassoon and Blunden succeeded in what they set out to do. Sassoon succeeded in presenting to the reading public, and Blunden added the necessary initial critical apparatus. Both used Owen to explain the war to their contemporaries. While this was appropriate and even necessary during the years immediately following the war, it is now time to move beyond this. Critics must take the lead from Hibberd and Breen. They must take a fresh view of Owen’s work outside the myth of Wilfred Owen and reevaluate his poetry.