Though Faulkner’s The Unvanquished is set during the Civil War, another war is being fought simultaneously. This second war is not one of guns and thievery, but one of beliefs. It is a conflict between two philosophies: idealism and pragmatism. This war rages on throughout the novel, but is decided by one event: Bayard’s decision not to avenge his father’s death.

An idealist is one who is guided by ideals, especially one that places ideals before practical considerations. Life in Yoknapatawpha was 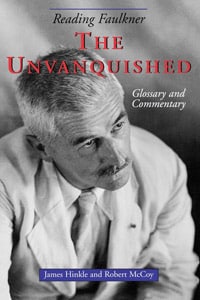 idealistic, as was life everywhere in the South at the time. The Southern Code was entirely idealistic. Throughout the book, idealism seems dominant over pragmatism. For example, all of the Sartoris women were idealists; almost everyone in Yoknapatawpha was an idealist. The fact that John Sartoris was able to get away with murder and be elected into public office soon after is a strong example of this.

There were not many pragmatists in the novel. By definition, a pragmatist is one who believes that the meaning of conceptions is to be sought in their practical bearings, that the function of thought is to guide action, and that truth is preeminently to be tested by the practical consequences of belief. Bayard Sartoris was a pragmatist. He ‘let his conscience be his guide’. Telling his father about Drusilla’s attempt to seduce him and refusing to avenge his father’s death are two good examples of this. In the beginning of the novel, Bayard is shown to be simple minded, but as time passes on and Bayard grows into a young man, his mind develops and he ultimately ends the battle between idealism and pragmatism in one carefully thought out decision.

The battle between the two philosophies is very subtle in the beginning. But it grows and strengthens, and since there can only be one winner, the pragmatist is victorious. When Bayard’s father is killed, and Bayard denies Drusilla the satisfaction of vengeance, Drusilla’s idealistic beliefs are shattered, and she is forced to leave, thus ending the war. The Southern Code becomes nothing, because one person refuses to obey it. When Faulkner wrote The Unvanquished, the Civil War appeared to be the main event, but hidden behind was another war: a war of beliefs. It appears that the South lost two great wars during that time period, one for lack of manpower, and the other for lack of reason. Perhaps things would have been different if the South had won the Civil War. Maybe Bayard would not have had the opportunity to decide the fate of the Southern Code all alone.