William Marshal is considered by many to be the epitome of knighthood and chivalry, as well as being an outstanding ambassador, during the turbulent twelfth and thirteenth centuries of England. From a virtually obscure beginning, William evolves into one of the most dominant stately figures of the time in England. During his brilliant military and political career, William served as knight for the courts of Kings Henry II, Richard (the Lion-hearted), and John. William was born around 1147 to John Marshal and Sybil of Salisbury during the reign of King Stephen. His father, John Marshal, served as a court officer and eventually earned the status of a minor baron. John Marshal was a shrewd soldier and a skilled negotiator. He was the premier example of lordship in William’s life. William’s relationship with his father would be brief and he would never experience him beyond his childhood. John Marshal died in 1165. John would leave a legacy behind that would influence William’s life and spark the future of his outstanding career both as a soldier and a courtier. 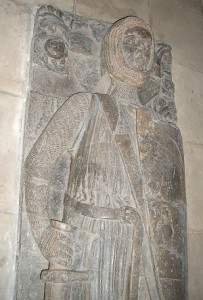 known throughout Europe as one of the grander patrons of knighthood. In the Tancarville household, William would learn courtliness in addition to all other prerequisites found in a professional soldier of the day. After six years of being a squire in the Tancarville Household, Marshal was knighted in 1166. In 1170, King Henry II appointed William to the head of his son’s mesnie or military household. William was responsible for protecting, training, and maintaining the military household for Prince Henry. In 1173, William knighted the young Henry, becoming his lord of chivalry. During this time period, Marshal earns many victories on the tournament field and here he first establishes himself as one of the most prolific and gallant knights of the time. During these tournaments, Marshal began to create and mold friendships with the most powerful and influential men of the day. In 1183, during a rebellion against his father, Prince Henry contracted dysentery. As his health rapidly deteriorated, Prince Henry gave William his cloak, which had a Crusader’s cross stitched on it, and made him promise to deliver it to the Holy Sepulchre in Jerusalem. William pledged to fulfill his request. Prince Henry died shortly there after. Afterward, Marshal traveled to the holy-land to deliver the prince’s cloak. He remained in Jerusalem for two years. Upon his return to England, Marshal is welcomed into the King’s military household. War, counsel and command were now his daily life. William is a common figure in the court and currently does not have a prominent status. Marshal faithfully serves King Henry II during the last years of his reign.

The King has two heirs to the throne in Richard and John. This presents a problem of sorts for Henry. Richard, the most capable and competent, appears destined to descend the throne. Henry would prefer John in succeeding him as king, however he realizes that Richard is by far the most qualified and prolific of the two. Toward the end of Henry’s rule, Richard rebels against his father, joining Phillip II of France. The two begin a series of battles against the King. During this time period, William remains faithful to Henry. Marshal inevitably realizes that his current enemy may well become his future king. This conflict does not influence William’s fidelity for his King. His loyalty to Henry remains in tact and is not compromised despite the fact that treason might have seemed advantageous to him at the time. These wars coupled with his bitter relationship with Richard take a heavy toll on the King. In 1189, Henry’s health gradually deteriorates until he eventually dies. Despite their past differences, Richard returns home to England for his father’s funeral and to assume his birthright of the throne. The count, soon to be king, was already turning in his mind the execution of the grand plan that was to become the Third Crusade. After he becomes king, Richard has a meeting with Marshal. Richard decides to retain Marshal into his own military household. Richard also decides to fulfill a promise to Marshal from his father. Henry had promised William the title of Lord of Striguil. This title also included for Marshal the marriage of Isabel de Clare. Richard raised Marshal to the higher circles of power. In 1189, William Marshal becomes an official magnate.

Richard appreciates the loyalty and integrity that Marshal possessed while serving under his father. He also recognizes that Marshal’s skill and knowledge are superior and practically unmatched in this field. Richard entrusts the security of his kingdom to Marshal, along with a few other individuals, while he is away on the Third Crusade. Richard remained in the Holy Land for about five years. He returns to England in 1195. For the rest of Richard’s reign William Marshal was deeply engaged in the business of the court, and for the most part he spent the five years in France. King Richard’s rule over England ended abruptly. He was killed while trying to besiege a small castle. On his deathbed, Richard left his kingdom to his younger brother John. John was not a successful or efficient king. Many territories of the kingdom were lost to France during John’s reign. This didn’t prevent William from prospering during John’s reign.

Marshal acquired many lands during this time period, as well as the prestige that accompanies being a large landowner. It is during the reign of King John that Marshal earns the official title Earl of Pembroke. John levied heavy taxes on England and reserved the right to dispense punishment as he saw fit. John became extremely unpopular with the barons of that age. Eventually, these events all contributed to John being forced to sign the Magna Carta, the first basic document of the British constitution, which eventually lead to the creation of the English Parliament. Loyalty to the king during this time was most difficult for Marshal. After a rebellion by the Barons, John grew ill beyond reconciliation. He died in 1216. This was the third king that Marshal had seen buried during his service to the England. Henry III was to be the next King of England. William was chosen by his peers as the regent for the nine year old Henry III. This reestablished royal rule in England. Marshal watched over the noble household and cared for the young king until his own death on May 14, 1219. William served faithfully under three kings and served as regent for a fourth. His loyalty and honor were never compromised. His oaths of fealty and innate sense of honor governed his entire life. Because of his commitments, William Marshal will remains the most outstanding knight of the Middle Ages.