Abraham, also known as Abram is most commonly known for being the Father of the Jewish people. The majority of the information found on 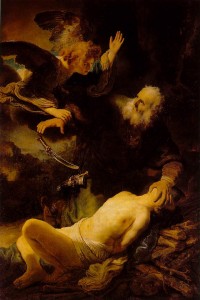 Abraham is located in the Old Testament’s Book of Genesis. Other than that, there are no real historical records on the life of Abraham, so the history of his life was passed by word of mouth, and was there after made into biblical stories. There is also the question if Abraham really lived, due to the little information available on his life. Abraham is most famous for making his Covenant with God.

Abraham would have lived somewhere between the years of 2000 and 1500 BC. He was born in the city of Ur. Abraham’s real name was Abram. The father of Abram, Terach, had two other sons, Haran and Nachor. While living in the city of Ur, Abram married his half-sister, Sarai who later took on the name of Sarah. The newlyweds later learned that Sarai was sterile. They then traveled north to Charan, accompanied by Abraham’s father Terach. While in Charan Terach died. It was in Charan where God made his first of a series of revelations to Abram. God spoke to Abram, and told him that he would promise to bless him and make a great nation of him. Abram willingly decided to follow God to the city of Canaan. Abram not only traveled with his wife on this journey, but he also picked up his nephew, Lot. He lived his life in Canaan as a Nomad. Famine eventually struck the land of Canaan, forcing Abram and his family to move on to Egypt.

In Egypt, Abram was fearful that the Egyptians would kill him and take his wife Sarai if they were to discover that the two were married. Abram attempted to cover this up by telling everyone that he and Sarai were just brother and sister. The Pharaoh demanded that Sarai be brought to his palace, and as result, God sent down plagues which devastated all of Egypt. In a desperate attempt to save his kingdom, Pharaoh decided it would be best to send Abram and Sarai away.

Abram and his family returned to Canaan after the Famine had ended. Both Lot and Abraham had great wealth in Canaan. The two both owned livestock, and large quantities of silver and gold. Eventually Abram and Lot found that the land could no longer provide the resources that the two men required of it. The two went their separate ways, Lot going to the Jordan Plain, and Abram staying in Canaan. God once again appeared to Abram and revealed the land that he would someday give to Abram and his children. This time, God promised Abram that his offspring would be of so many that no one would be able to count them, just like the dust of the earth.

By this time a great war had started up in the Jordan Plain. As a result of the war, Lot was made a imprisoned by King Chedorlaomer of Elam. When Abram got word that his cousin Lot was being held prisoner, he and a group of his servants went to battle the captors. The army was able to successfully rescue Lot and several other prisoners. Abram was then blessed by priest Melchizedek, the king of Salem, for his brave heroic actions.

By this point, Abram and Saraia still have no children. Saria tells Abram to go and wed their slave Hagar, and to have Children with her. Abram 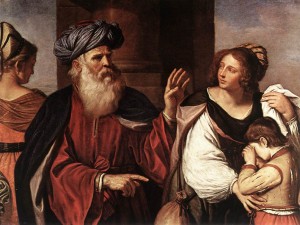 does so, and has a son, Ishmael. While Hagar was pregnant, fights between Hagar and Saria began to break out questioning each other on who was the real mistress of the house. Abram showed no favoring judgment over the two women, and restored order in the house hold. Hagar eventually fled to the dessert due to the poor treatment that Sarai was giving her. God eventually came down to Hagar and told her to go back home and that someday the baby she was carrying would be blessed.

Once Abram reached 99 years old, God made a Covenant with him promising to make him the father of nations and to give Canaan to him and his offspring. As part of the agreement of the Covenant, God required the circumcision of Abram and his male descendants; This was to seal the covenant. God then made another promise to Abram. God promised Abram that Sarai would soon bear a son, and that she would someday be the mother of nations. Abram was said to have found God’s last promise rather amusing. It was probably because Sarai was 90 years old and incapable of bearing children anymore. Sarah was also witness to the promise of a child, for God sent angels to her promising that she would have a male son. The last part of God’s covenant was that the name Abram be changed to Abraham, and Sarai changed to Sarah. Abraham means “Noble Father”. Through this covenant, God was planning to send his savior.

God once again confided in Abraham by telling him that he was plotting to soon destroy the cities of Sodom and Gomorrah due to the corruptness of their inhabitants. Upon hearing this, Abraham pleads with God telling him that there are many innocent people that do not deserve to die. God reconsidered, and agreed that if he could find 50 innocent people he would not destroy the two cities. Under pressure from Abraham, he reduced the number to just 10 innocent people. God sent his Angels out in search of just 10 righteously guided people. Upon reporting back to God, the angels were only able to find Lot to be innocent and good. God then appeared to Lot and told him to take his entire family and to leave. Lot’s wife later disobeys God’s orders to leave, and she is turned into a pillar of salt.

Abraham’s family then migrated to Negev. While traveling through the city of Gerar, he once again is fearful of Sarah being taken from him, so he and Sarah tell everyone that they are Brother and Sister. This time, Abimelekh, the King of Gerar, took Sarah away. God then appeared to King Gerar in a dream. King Gerar later returns Sarah to Abraham and gave him extra compensation to make up for his mistake of taking Sarah away.

Some time later, Sarah had the son that God promised her. Sarah laughed upon the birth of the child so they named the child Isaac. The term Issac means “he laughed” in Hebrew. Sarah finds that Ishmael is a terrible influence on Isaac, so she tells Abraham to send him away with his mother. Abraham at first is very reluctant to send away his first born son, but God suggests that Abraham listens to what his wife Sarah has asked. God also promised that someday Ishmael would have his own nation.

Once Isaac was slightly older, God commanded Abraham to take Isaac to a mountain and to sacrifice him at the top. This was an ultimate test that God gave to Abraham. Being God’s servant, Abraham went as he was told with Isaac to the top of a mountain in order to sacrifice his son. Abraham prepared to cut Isaac’s throat, but just in the nick of time God’s angels stopped him. Seeing that there was a ram caught in some bushes, Abraham sacrificed that to God instead.

Sarah later died in Hebron. Abraham decided to buy the Makhpelah Cave and the adjoining field from Ephrom the Hittite for a burial site. Abraham then realized that Isaac should have a wife. Abraham sent one of his servants back to his homeland to search out a wife for Isaac. The servant was able to find Rebecca, Isaac’s cousin, and was able to get her to come back and marry Isaac. Abraham also found himself marrying Keturah, a concubine. Abraham and Keturah had 6 children, Zimran, Yakshan, Medan, Midian, Yishbak, and Shuach, before dying at the biblical age of 175. Isaac and Ishmael buried their father in the Makhpelah Cave next to their mother, Sarah.

In the end, God kept his promise with Abraham. Abraham was father to a new nation, that’s how he got the title of Father to the Jewish people. The rest of the bible primarily tells about the children of Abraham. Abraham is therefore one of the most important early characters mentioned in the bible.