“Autobiography: Story of one’s life, written by oneself.”(Halsey 64). Everyone knows what an autobiography is, but not so many people realize that although not all authors write a book that can be called a factual autobiography, many authors frequently allow personal, real life experiences to influence their fictional writings. An excellent example of such an author is Anthony Burgess. Anthony Burgess is recognized today as an English novelist, critic, essayist, and composer (editor CLC 80).

Burgess is such a literary genius, it was once said of him that “… his agent, publisher, and his entry in “Who’s Who” could not provide the exact

number of books he wrote.” (Baldwin A8). Some of Burgess’s works include The Long Day Wanes, The Doctor is Sick, and, perhaps Burgess’s most famous book, Clockwork Orange. A Clockwork Orange is an interesting novel that paints a picture of a gruesome violence in the not-so-distant future. The story is based on, and told by the narrator, the fifteen-year old Alex, but it shows many references to the life and experience of its author. In a series of five books, Burgess also focused on his life experiences. Enderby’s Dark Lady was the fifth in the series, and that will be the second book focused on in this paper. Anthony Burgess’s work in A Clockwork Orange and Enderby’s Dark Lady strongly reflects significant events or influences in his own life.

Anthony Burgess was born John Burgess Wilson in Manchester, England in early 1917. (Stinson 1). Both of Burgess’s parents were members of the theatric arts: His father was a pianist, his mother was a musical actress. Burgess went to a Catholic elementary school, and was one of the many victims of the “iron discipline and largely rote memorization” (Stinson 2) typical in such schools of the time. Burgess attended Xaverian College, and later moved on to the inexpensive University of Manchester, where he hoped to pursue an education in music. He was rejected form the music department because he had failed physics. Instead, Burgess entered the English department (Stinson 6). In 1940, Burgess graduated with his B.A., with honors, in literature and English language (Stinson 7). Shortly after, Burgess enlisted in the Royal Army Medical Corps, and spent most of his six years in the service in the entertainment section, playing the piano and writing songs, or in the Army Educational Corps (Stinson 7).

In 1946, Burgess was discharged with the rank of sergeant-major. Burgess found himself employed in several different jobs, and living in several different countries in the years that followed. In 1948 he became English Master at a grammar school in Banbury, near Oxford. During his time in Banbury, Burgess wrote occasionally, but saw writing as a time consuming process that took away from his composing. It was around this time of transition that Burgess received a letter from his publisher, Heinemann stating that his first novel, A Vision of Battlements was to be published, and they were requesting another. So began Burgess’s career of as a novelist (Stinson 9). In 1956, Burgess was diagnosed with a brain tumor. His doctors gave him one year to live. In a mad panic to leave some form of income behind for his wife, Lynne Jones, Burgess set out to write ten novels in one year. Buy the end of Burgess’s first year as a full-time writer; he had completed about five and one half novels. A few weeks after the end of the first year, the doctors told Burgess that they found no sign of the tumor, and he was going to live after all (Baldwin A8). This was just the beginning of Burgess’s career as a writer. Although some of Burgess’s works were not treated kindly by the critics, the majority of his novels were generally well received by the public.

In 1962, Burgess wrote A Clockwork Orange, the novel that many readers discovered Burgess’s genius through. To date, this is still his most famous book (Baldwin A8). In 1976, Burgess published Enderby’s Dark Lady under the name of Joseph Kell. A satire in which Enderby, a director from the four previous novels in this five novel series, searched for in England, and found in America, a place to perform (Stinson 98).

A Clockwork Orange is a novel that deals with the violence of youth in the future. The Narrator is a fifteen-year-old child of the streets that enjoys beating the helpless, raping the defenseless, and robbing the penniless. About half-way through the novel, Alex is caught by the authorities. They attempt to reform him from his life of crime by using a controversial new technique that forces Alex to become physically ill at even the thought of violence. In the last chapter of the book, Alex is able to break free of the mental chains that the reform had captured his soul in, and reinstate his existence as a creature capable of moral choice by reentering his life of crime (Burgess A Clockwork Orange). Throughout the rough biographical sketch given, certain points in may be selected in which events in Burgess’s life can be shown to have heavy influence on A Clockwork Orange. Burgess published A Clockwork Orange in 1962, a time in England that was marked with a great amount of crime and very violent youths. Burgess himself had once cited this setting as the source of, or at least the inspiration of the stories of horror and violence told in this novel (Baldwin A8). The narrator of this book is the main source of these horror stories. Alex is cheerful in his life of crime, and is high-spirited about beating the elderly and raping the defenseless (Bergonzi 85). This trend can be seen in other books as well. One critic summed it up rather well by saying “His fiction is peopled with lapsed Catholics, failed poets and musicians, ineffective teachers, linguists who cannot adjust to the world as easily as they do to the word, and other intellectual misfits.” (Friedman 1). And so, in this manor, Burgess used the setting in which he lived to create the characters of many of his fiction novels.   One of the themes in A Clockwork Orange even seems to have a strong connection to Burgess’s early life. The “conservative and pessimistic view of human nature” portrayed in A Clockwork Orange can be attributed to his mother’s death (Bergonzi 85). In 1919, Burgess’s father came home on furlough to find that the Spanish Influenza had killed both Burgess’s mother and older sister. Although Burgess was only two, “This event and its consequences may have played some part in fashioning Burgess into what he considers a “creature of gloom” is reasonable speculation” (Stinson 1). This pessimism is evident in the final chapter of A Clockwork Orange, where the narrator exercises his right to moral choice by choosing a life of crime even after extensive attempts at reforming him.

A much more direct parallel can be drawn to the beating of Mrs. F. Alexander in A Clockwork Orange. In April, 1944, Burgess’s pregnant wife 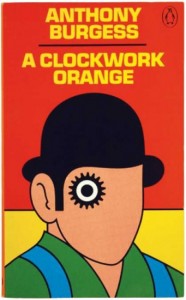 Lynne was beaten and robbed in London, and miscarried. The doctor ordered her never to have children, and this caused Lynne to sink into a pit of alcoholism. She died of cirrhosis of the liver in March 1968. Burgess felt that the attack was “an important cause of her death. [Burgess] transmutes this wrenching real-life experience into the fatal attack on Mrs. F. Alexander by Alex and his three droogs in A Clockwork Orange.” (Stinson 9).       Out of all these influences of Burgess’s life on A Clockwork Orange, Burgess’s love of music, and its effect on his writing are perhaps the most evident. As mentioned earlier, Burgess originally wanted to go to school for music, but he was not accepted due to the fact that he had failed physics (Stinson 6). This minor setback did not, however, keep Burgess from learning how to play the piano and teaching himself how to compose music (Stinson 5). Even some critics have noticed how Burgess allows his love for music to creep into his love for literature: “[Burgess’s] continuing fondness for music often found its way into his novels, however, and he did produce a number of musical compositions.” (Friedman 1). Burgess himself wasn’t too humble about his knowledge in the field of music. He once wrote “Most Musicians know about literature, but few literaturists know about music.” (Baldwin 1).

Burgess’s love for music can very easily be seen in the narrator of A Clockwork Orange, Alex. Alex love music too. He often finds himself enveloped and surrounded by such classical works as Beethoven, to whom he refers to as ‘Ludwig Van’ in this passage: “Waving the great shiny white sleeve of the Ninth, which had on it, brothers, the frowning beetled like thunderbolttled listo of Ludwig Van himself….and I set the needle hissing on the last movement, which was all bliss. There it was then, the bass strings gavoretting away from under the bed at the rest of the orchestra, and then the male human goloss coming in and telling them all to be joyful.” (Burgess 43,46). This passage shows how much Alex enjoys and lives for music, much as Burgess did at times.

The reflection of Burgess’s life can also clearly be seen in the second book to be analyzed in this paper, Enderby’s Dark Lady. This book is about the travels of Enderby, a out-of-work theatrical director, searching for work in England and abroad. Enderby finally does find work in the USA, in Manhattan. “Dark Lady”, a play directed by Enderby, that took place in Shakespearean times, was the play Enderby directed in the USA. Enderby falls in love with the actress that plays the part of ‘the Dark Lady’, April Egar. When his love is not returned, Enderby deal with the pain by drinking excessively. In the end, Enderby’s play was a huge success, but Enderby never wins the heart of April (Burgess Enderby’s Dark Lady). For example, the previously mentioned beating of Burgess’s wife Lynne influenced Enderby’s Dark Lady, as well as A Clockwork Orange.

In the book, Enderby’s Dark Lady, Enderby’s wife was savagely beaten, and raped in the violent streets of England, much like Lynne was beaten (Encyclopedia Americana 80). This also displays a parallel to the turbulent times in England in which Burgess wrote many of his novels (Baldwin 8). Throughout the book, Enderby’s Dark Lady, Enderby constantly tries to find a place to express his creative talent in the field of theatrical directing. He is unsuccessful in England, and is forced to go across an ocean to find a place to display his work. This is much like the difficulty Burgess had finding someone to publish his work (Roger 55). As mentioned before, Burgess always had a great interest in music. Burgess even taught himself how to compose music and play the piano.