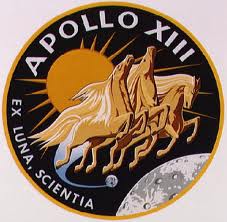 Kennedy Space Center. The space vehicle crew consisted of James A. Lovell, Jr. commander, John L. Swigert, Jr., command module pilot and Fred W.  Haise, Jr. lunar module pilot. The Apollo 13 Mission was planned as a lunar landing mission but was aborted en route to the moon after about 56 hours of flight due to loss of service module cryogenic oxygen and consequent loss of capability to generate electrical power, to provide oxygen and to produce water. Spacecraft systems performance was nominal until the fans in cryogenic oxygen tank 2 were turned on at 55:53:18 ground elapsed time (GET). About 2 seconds after energizing the fan circuit, a short was indicated in the current from fuel cell 3, which was supplying power to cryogenic oxygen tank 2 fans. Within several additional seconds, two other shorted conditions occurred. Electrical shorts in the fan circuit ignited the wire insulation, causing temperature and pressure to increase within cryogenic oxygen tank 2. When pressure reached the cryogenic oxygen tank 2 relief valve full-flow conditions of 1008 psi, the pressure began decreasing for about 9 seconds, at which time the relief valve probably reseated, causing the pressure to raise again momentarily.

About a quarter of a second later, a vibration disturbance was noted on the command module accelerometers.  The next series of events occurred within a fraction of a second between the accelerometer disturbances and the data loss. A tank line burst, because of heat, in the vacuum jacket pressurizing the annulus and, in turn, causing the blow-out plug on the vacuum jacket to rupture. Some mechanism in bay 4 combined with the oxygen buildup in that bay to cause a rapid pressure raise which resulted in separation of the outer panel. The panel struck one of the dishes of the high-gain antenna. The panel separation shock closed the fuel cell 1 and 3 oxygen reactant shut-off valves and several propellant and helium isolation valves in the reaction control system. Data were lost for 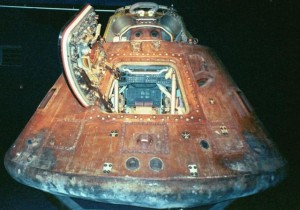 about 1.8 seconds as the high-gain antenna switched from narrow beam to wide beam, because of the antenna being hit and damaged. As a result of these occurrences, the CM was powered down and the LM was configured to supply the necessary power and other consumables.

The CSM was powered down at approximately 58:40 GET. The surge tank and repressurization package were isolated with approximately 860 psi residual pressure (approx. 6.5 lbs of oxygen total). The primary water glycol system was left with radiators bypassed. All LM systems performed satisfactorily in providing the necessary power and environmental control to the spacecraft. The requirement for lithium hydroxide to remove carbon dioxide from the spacecraft atmosphere was met by a combination of the CM and LM cartridges since the LM cartridges alone would not satisfy the total requirement. The crew, with direction from Mission Control, built an adapter for the CM cartridges to accept LM hoses. The service module was jettisoned at approximately 138 hours  GET, and the crew observed and photographed the bay-4 area where the  cryogenic tank anomaly had occurred. At this time, the crew remarked that the outer skin covering for bay-4 had been severely damaged, with a large portion missing. The LM was jettisoned about 1 hour before entry, which was performed nominally using primary guidance and navigation system.