The Greek Orthodox Church is one of the three major branches of Christianity, which “stands in today’s society as one of the communities created by the apostles of Jesus in the region of the eastern Mediterranean, and which spread by missionary activity throughout Eastern Europe” (Meyendorff 5).The word orthodox comes from Greek, meaning right-believing. Currently the orthodox religion has more than 174 million followers throughout the world. 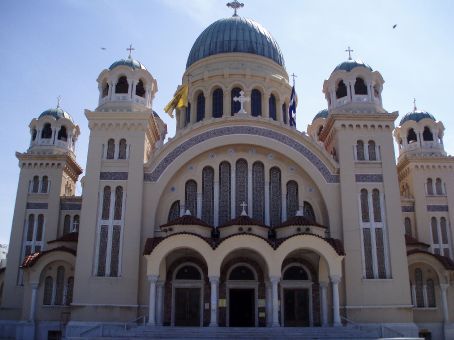 church may be called patriarch, metropolitan, or archbishop. These clergymen are much like the Pope in that they decide church doctrine and generally make the important decision on controversial topics.    In its doctrinal statements, “the Greek Orthodox church strongly affirms that it holds the original Christian faith, which was common to East and West during the first millennium of Christian history” (Meyendorff 18).

More particularly, it recognizes the authority of the ecumenical councils at which East and West were represented together. These were the councils of Nicaea I (325), Constantinople (381), Ephesus(431), Chalcedon(451), Constantinople II (553), Constantinople III (680), and Nicaea II (787) (Encarta 1996). The power of teaching and guiding the community is bestowed on certain ministries, particularly that of the bishop of each diocese or is directed through certain institutions, such as councils. Because the church is composed not only of bishops, or of clergy, but of the whole laity as well, “the Orthodox church strongly affirms that the guardian of truth is the entire people of God” (Encarta 96). The doctrine of seven sacraments is accepted in the Greek Orthodox church, although no supreme authority has ever limited the sacraments to that number. The central sacrament is the Eucharist; the others are baptism, normally by immersion; confirmation, which follows baptism immediately in the form of anointment with chrism; penance; Holy Orders; marriage; and anointment of the sick. The Greek Orthodox Church admits married men to the priesthood. Bishops, however, are elected from among celibate or widowed clergy.

The Greek Orthodox religion differs for many other religions in that they express prayers and worship with pictures. This central function of religious images, called icons, received its full definition following the end of the iconoclastic movement in Byzantium (843). The iconoclasts were looked upon as sacrilegious in that they resemble idols, which were prohibited in the Old Testament. “The Orthodox theologians, on the other hand, based their arguments on the specifically Christian doctrine of the incarnation: God is indeed invisible and indescribable in his essence, but when the Son of God became man, he voluntarily assumed all the characteristics of created nature, including describability”(Meyendorff 21). Although there are many differences between the Eastern and Western Churches, there is always the possibility of the two churches combining in the future. If each church is willing to make small corrections in their doctrine, the two churches that have been separated for hundreds of years could possibly combine in the decades ahead.