Mary Magdalene, from the town of Magdala located on the western Sea of Galilee, is portrayed by society as a prostitute and the 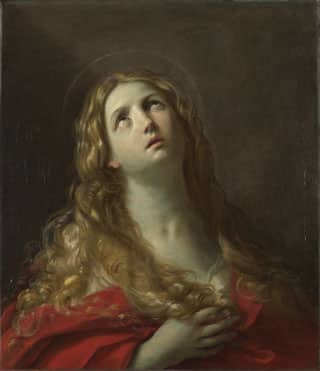 ultimate opposite of the Virgin Mary.[1] However, this depiction of her has been proven by the Catholic Church to be false. Not only is Mary Magdalene a well known biblical figure in our society through the teachings of the Catholic Church, her image as a biblical woman has been discussed throughout society and in different cultures.

Historically Mary Magdalene has been viewed as a prostitute, a weeping sinner and a woman who dries Jesus’ feet with her hair.[2] However, this portrayal of her is false. The confusion about Mary Magdalene’s character arose due to Pope Gregory I who identified Mary Magdalene as being the same person as Mary of Bethany who was a remorseful prostitute.[3] This misinterpretation changed Mary Magdalene’s image for the next 1400 years.[4] In today’s society most people practicing the Catholic faith recognize this misinterpretation and now indentify Mary as one of the main followers of Jesus Christ. Many believe that Mary Magdalene was, “Not just a disciple; she’s the apostle to the apostles” (http://www.bbc.co.uk, 7). In 1945, new information about the life of Mary Magdalene was revealed through the findings of apocryphal texts at Nag Hammadi.[5] In these newly found gospels, the scriptures suggest that Mary Magdalene and Jesus had a more intimate relationship with each other than Jesus had with the rest of his disciples.[6] However, because these gospels were from an apocryphal text many do not take them seriously and consider them biblical legends.[7] Clearly, there has been a misinterpretation in the fact that Mary Magdalene was a sinner. The only times in which Mary Magdalene was mentioned in the Catholic Bible is as a disciple of Jesus, as a bystander at His crucifixion, preparing His body for His burial and as a witness of Jesus’ miraculous resurrection.[8] From these references it can be seen that the Catholic Church did not perceive Mary Magdalene as a prostitute however many people in society continue to believe otherwise.

Although clarity has been achieved as to who Mary Magdalene was in the bible, during the Victorian period prostitution was known as “Magdalenes”.[9] In the video Mary Magdalene An Intimate Portrait, Cynthia Von Buhler, an artist, ignores the church’s teachings on Mary Magdalene and adopts the image of her as a prostitute, “I was really excited, I thought that here is this woman and she was a prostitute and a saint at the same time and I thought that was really intriguing” (Mary Magdalene An Intimate Portrait). Many in society also see the relationship between Mary Magdalene and Jesus as a bond that went beyond the relationship that Jesus shared with his other disciples. Martin Luther, a man who initiated the Protestant Reformation was one of the many believers of the intimate marital relationship shared between Mary Magdalene and Jesus.[10] Many even say that at the time of Jesus’ crucifixion she was expecting His child. [11] One of the most famous and controversial debates regarding Mary Magdalene arose from the novel  The Da Vinci Code written by Dan Brown. [12] One of the main themes of The Da Vinci Code was the unravelling of messages behind the painting of “The Last Supper”. In Leonardo Da Vinci`s famous painting it is said that one of the apostles is in fact Mary Magdalene and the letter “V” that is formed between Jesus and Mary expresses the unity that they share.[13] If examined closely it can be observed that the woman figure sitting next to Jesus “is wearing a mirror image of Jesus’ robes” (Lahr, 236). Therefore, “The Last Supper” shows how complimentary Jesus and Mary Magdalene were and it further supports the alleged relationship between Mary and Jesus.

The Da Vinci Code sparked many debates about the Bible and resulted in Catholics and other cultures rethinking the truths of Christianity.[14] Many readers have mixed feeling as to whether or not to believe the information that Dan Brown has disclosed in his novel. Some feel that it would not have been published if it did not contain some truth and one reader even went as far as to say that they will never enter a church again. [15] However, many believe that The Da Vinci Code is an excellent conspiracy theory but that is the extent, because the only place where you can read the true events of Jesus Christ is in the Holy Bible.

Until the latter part of the 20th century woman in most cultures were not taken seriously and they had little importance in society. Many feel that this was a significant contributing factor to creating the illusion of Mary Magdalene as a prostitute, “Mary Magdalene was a woman so important to Jesus and Christianity, that all four gospels include her. But as years went by and Christianity became more mainstream, she didn`t fit into patriarchal society. She was too strong and too independent. Her importance couldn`t be denied but her character could be changed to make her less threatening. And so she was turned into a prostitute who had been forgiven of her sin” (Mary Magdalene an Intimate Portrait).  The Gospel of Mary was another apocryphal text that has been uncovered and even though it is the only Gospel written in the name of a woman it is not considered important to most people. [16] Although Mary Magdalene’s image has been redefined in the Catholic Church, many media sources will not dismiss the image of Mary as a prostitute. [17]

It is clear that Mary Magdalene played an important role in the Bible and that she is a highly recognizable biblical figure. Although she has been given a bad reputation, if one closely examine the stories of the Bible it is obvious that Mary Magdalene was a loyal follower of Jesus.  In conclusion, it doesn’t really matter whether Mary Magdalene is perceived as a prostitute or if she in fact did have an intimate relationship with Jesus because it does not alter the underlying messages and teachings of the Bible.

Growing up I saw the Magdalene archetype portrayed in movies and tv dramas like Gunsmoke as the Madame, the strong independent owner of a saloon, which the Marshall, the peacekeeper, frequented. Her establishment employed women to be social to men. Down through history, women have been judged immoral for running or working or frequenting saloons unescorted. Men have not. Jesus like the Marshall in Gunsmoke…hung out in the pubs. The Woman who publically kissed Jesus’ feet has moxie. Open your eyes. She is not being paid by Jesus the good Teacher or Simon to do this. She is doing this… Read more »

It matters how the disciples see Mary Magdalene. Seeing her as a sinner is important because SHE Jesus is the one who loves much. She forgives those who exploit her and other women as a woman who loves much. What is her sin? Is it selling her comforting embraces? Or is it turning the other cheek and letting men and women sweep and keep her love for Martha’s Lord?

While I initially learned negative facts about Mary Magdalene as a former Catholic, I am so happy that the truth is out! I’m sure Jesus and Mary were friends and lovers and committed to one another. I’m sure Jesus’ love for her enhanced his physical pleasure in life and was one of the many values he wanted the world to appreciate – the value, equality and full expression of love to a committed partner.