Skylab was America’s first experimental space station. Some of Skylab’s program objectives were:  To prove that humans could live and work in space for extended periods, and to expand our knowledge of solar astronomy well beyond Earth-based observations. Skylab made much use of Saturn and Apollo equipment.  Through the use of a “dry” third stage of the Saturn V rocket, the station was completely made as a workshop area before launch.  Crews visited Skylab and returned to earth in the Apollo spacecraft.

The station was launched into orbit by a Saturn V booster.  Almost immediately, problems developed due to vibrations during lift-off.  A critical 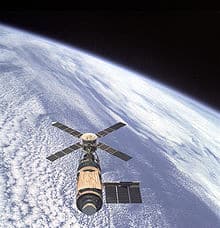 meteoroid shield ripped off taking one of the craft’s two solar panels with it; a piece of the shield wrapped around the other panel keeping it from deploying.

Skylab was maneuvered so its Apollo Telescope Mount (ATM) solar panels faced the Sun to provide as much electricity as possible.  Because of the loss of the meteoroid shield, however, this positioning caused workshop temperatures to rise to 126 degrees F. The launch of Skylab 2 was postponed 10 days while NASA engineers developed procedures and trained the crew to make the workshop habitable.  At the same time, engineers “rolled” Skylab to lower the temperature of the workshop.

The crew meats with Skylab on the fifth orbit.  After making many repairs, including deployment of parasol sunshade which cooled the inside temperatures to 75 degrees F, by June 4 the workshop was in full operation.  In orbit the crew conducted solar Earth resources experiments, medical studies, and five student experiments; 404 orbits and 392 experiment hours were completed; three EVAs that totaled six hours, 20 minutes. 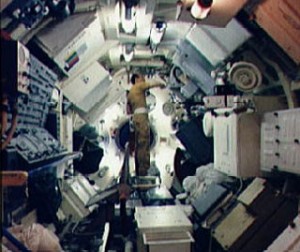 Last of the Skylab missions; included observation of the Comet Kohoutek among numerous experiments; they completed 1,214 Earth orbits and four EVAs totaling 22 hours, 13 minutes. Three -man crews occupied the Skylab workshop for a total of 171 days, 13 hours.  It was the site of nearly 300 scientific and technical experiments. The empty Skylab spacecraft returned to Earth on July 11, 1979 scattering debris over the Indian Ocean and the sparsely settled region of Western Australia. The chances of being hit by Skylab’s debris were 1 in 600 billion.