The vehicle used for the Vostok program consisted of two models. The first model was a reentry capsule while the second part was an 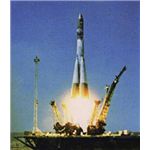 instrument model. The spacecraft was both designed to take pictures with a camera in orbit and be able to maintain a passenger.

The problems during this flight were very limited but what did occur was the “race to space” notion between Russia and the United States. The six manned Vostok spacecrafts proved the Russian sophistication in space travel, which led to a quicker development of America’s own space endeavors.

Another accomplishment of the Vostok program was Vostok 6, which introduced the first woman in space. Valentina Tereshkova went into orbit on June 16, 1963. The Vostok program was the first program to send a group of men and a woman into space, and the Russians first did this. All six missions were successful and experienced no immense difficulties that would heed their main accomplishments. The most famous man to mention who is responsible for the Vostok program would be Sergey Pavlovich Korolyov, who received permission after a lengthy debate of this mission in 1958.