The shuttle, a manned, multipurpose, orbital-launch space plane, was designed to carry payloads of up to about 30,000 kg (65,000 lb) and up to seven crew members and passengers. The upper part of the spacecraft, the orbiter stage, had a theoretical lifetime of perhaps 100 missions, and the winged orbiter could make unpowered landings on returning to earth. Because of the shuttle’s designed flexibility and its planned use for satellite deployment and the rescue and repair of previously orbited satellites, its proponents saw it as a major advance in the practical exploitation of space. Others, however, worried that NASA was placing too much reliance on the shuttle, to the detriment of other, unmanned vehicles and missions.

The first space shuttle mission, piloted by John W. Young and Robert Crippen aboard the orbiter Columbia, was launched on April 12, 1981. It 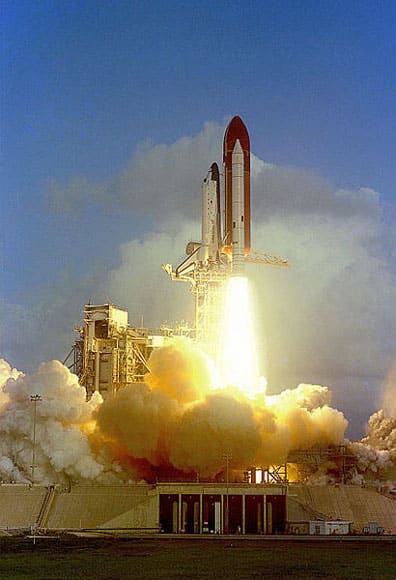 was a test flight flown without payload in the orbiter’s cargo bay. The fifth space shuttle flight was the first operational mission; the astronauts in the  Columbia deployed two commercial communications satellites from November 11 to 16, 1982. Later memorable flights included the seventh, whose crew included the first U.S. woman astronaut, Sally K. Ride; the ninth mission, November 28-December 8, 1983, which carried the first of the European Space Agency’s Spacelabs; the 11th mission, April 7-13, 1984, during which a satellite was retrieved, repaired, and redeployed; and the 14th mission, November 8-14, 1984, when two expensive malfunctioning satellites were retrieved and returned to earth.

Despite such successes, the shuttle program was falling behind in its planned launch program, was increasingly being used for military tests, and was meeting stiff competition from the European Space Agency’s unmanned Ariane program for the orbiting of satellites. Then, on January 28, 1986, the shuttle Challenger was destroyed about one minute after launch because of the failure of a sealant ring on one of its solid boosters. Flames escaping from the booster burned a hole in the main propellant tank of liquid hydrogen and oxygen and caused the booster to nose into and rupture the tank. This rupture caused a nearly explosive disruption of the whole system. Seven astronauts were killed in the disaster: commander Francis R. Scobee, pilot Michael J. Smith, mission specialists Judith A. Resnik, Ellison S. Onizuka, and Ronald E. McNair, and payload specialists Gregory B. Jarvis and Christa McAuliffe. McAuliffe had been selected the preceding year as the first “teacher in space,” a civilian spokesperson for the shuttle program. The tragedy brought an immediate halt to shuttle flights until systems could be analyzed and redesigned. A presidential commission headed by former secretary of state William Rogers and former astronaut Neil Armstrong placed much of the blame on NASA’s administrative system and its failure to maintain an efficient system of quality control.

In the aftermath of the Challenger disaster, the O-ring seals on the solid rocket booster (SRB) were redesigned to prevent recurrence of the January 28 failure. The shuttle launch program resumed on September 29, 1988, with the flight of Discovery and its crew of five astronauts. On this mission, a NASA communications satellite, TDRS-3, was placed in orbit and a variety of experiments were carried out. The success of this 26th mission encouraged the United States to resume an active launch schedule. One more flight was planned for 1988, and a total of 39 were scheduled through 1992. The long-delayed $1.5-billion Hubble Space Telescope was deployed by space shuttle in 1990 but, because of an optical defect, failed to provide the degree of resolution it was designed to have until it was repaired in December 1993. On February 2, 1995, Lieutenant Colonel Eileen M. Collins became the first woman to pilot the space shuttle. On March 18 the space shuttle Endeavor, piloted by Stephen Oswald, landed after a record 16 days, 15 hours in space.