On May 25, 1961 President Kennedy announced: “I believe this nation should commit itself to achieving the goal, before this decade is out, of landing a man on the Moon and returning him safely to Earth.”

In pursuit of this goal, it was considered necessary to conduct several unmanned test flights and supporting programs, including the Mercury,Gemini, Ranger, Surveyor and Lunar Orbiter.

The Mercury program aimed at meeting the Soviet challenge and putting American astronauts into orbit around the earth. The Mecury- 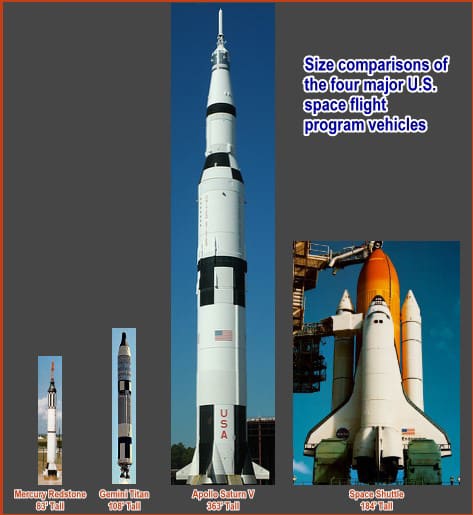 Redstone launched the first U.S. astronaut into space on May 5, 1961. Alan Shepard spent about 15 minutes in space during a sub-orbital mission aboard the Mercury capsule “Freedom 7.” Gus Grissom followed in his Mercury craft, the “Liberty Bell,” on an identical mission shortly after. Since the Redstone was only “one-staged”, it did not have the propulsive power to put two astronauts in space on the same mission. The Mecury-Atlas launch vehicle was a “one-and-a-half” stage vehicle which used an ultra-light-weight structure to reduce the lift-off weight of the rocket. Even with this development, it can barely make it into a
low-altitude Earth orbit. This modified vehicle launched John Glenn in his “Friendship 7” capsule into three Earth orbits on February 20, 1962. He was followed by astronauts Scott Carpenter, Walter Schirra, and Gordon Cooper in Mercury missions of somewhat longer duration. The Gemini program was the next major space activity.

Its two-stage design permitted two men to ride into space together so that they could conduct “extra vehicular activities”, or EVA’s. On June 3, 1965, Ed White took a daring step out of the Gemini 4 capsule into space. There he somersaulted, floated lazily on his back, pirouetted, and stood grinning like a kid on Gemini’s titanium hull for 21 minutes. The Gemini capsule was also designed to use fuel cells, which is one of the first technologies required for lunar landing. The Ranger series was the first American unmanned spacecraft to land on the Moon. The idea was that the spacecraft were going to fly straight into the Moon and would be destroyed on impact, so the pictures had to be sent back as quickly as they were taken. The first few Ranger shots (August, 1961 – October, 1962) failed for a variety of reasons, not all connected with the spacecraft itself. However, Ranger 4 did reach the Moon on April 26, 1962, being the first American spacecraft to do so. The Surveyor series was very successful in obtaining information about the lunar surface. Surveyor 1 lifted from Cape Kennedy on May 30, 1966 with textbook precision. It was the first flight of a space probe, and the first operational use of the liquid-hydrogen fueled booster. It eased itself on the Moon using gentle blasts from three small liquid-fueled vernier rockets, under the control of a computer which was kept informed of height and velocity by the onboard radar. The Surveyor carried solar cells, generating electricity from sunlight, so it was able to transmit thousands of superb photographs before the Sun set and the long lunar night began. Even then, it survived the low temperatures and revived at dawn, giving the experimenters an extra bonus. On August 10, 1966, the United States launched the Lunar Orbiter 1. Orbiter’s mission was primarily photographic. Orbiter 1 functioned superbly, producing the first high-definition pictures of the lunar Farside. Later, Orbiters did even better, producing a portfolio of lunar photographs. These photographs were of great importance, because the Rangers and Surveyors had begun to give the impression that the Moon was a somewhat dull, flat, and uninteresting place. But now the image was beginning to emerge of a world with landscapes as dramatic as any on Earth.

The next step in reaching President Kennedy’s goal was the Apollo program, which required an entirely new launch vehicle, the Saturn. On January 27, 1967, during a ground test of the Apollo spacecraft, fire broke out in the three-man command module. Because of the pressurized pure-oxygen atmosphere inside the spacecraft, a flash fire engulfed and killed the three astronauts: Grissom, White, and Commander Chaffee. As a result of this tragedy, the Apollo program was delayed more than a year while a major review of vehicle design and materials was accomplished. In October 1968, the first manned Apollo flight was launched by a Saturn IB booster. Astronauts Shirra, Cunningham, and Eisele circled the Earth for 163 orbits, checking spacecraft performance, photographing the Earth, and transmitting television pictures. In December 1968, Apollo 8, a landmark flight, carrying astronauts Borman, Lovell, and Andrews, circled the moon ten times. The Apollo 9 flight checked out underdocking, rendezvous, and docking of the Apollo lunar module landing craft during a 151-orbit mission. The Apollo 10 flight made thirty-one orbits of the moon in a rehearsal for the lunar landing. In 1969, man achieved the long-awaited goal of actually landing on the moon. The historical flight of the Apollo 11 was launched on July 16. After entering lunar orbit, astronauts Buzz Aldrin and Neil Armstrong transferred to the lunar module. The lunar module descended to the surface of the Moon on July 20, landing easily. A few hours later, Armstrong, in his bulky space suit, stepped onto the rocky surface of the moon. His first words were, “That’s one small step for man, one giant leap for mankind.” He was soon joined by Aldrin, and the two astronauts spent more than two hours walking on the lunar surface. They gathered soil samples, took photographs, and set up a solar wind experiment, a laser-beam reflector, and a seismic experiment package; Armstrong and Aldrin also erected and American flag and talked, by satellite communications, with President Richard Nixon in the White House. The return flight of Apollo 11 was without mishap, and the vehicle splashed down and was recovered on July 24 in the Pacific Ocean near Hawaii. The Apollo 11 flight attracted great interest around the world. The next moon-landing flight was Apollo 12 on November 14, 1969.

Apollo 12 demonstrated many improvements over Apollo 11 techniques, particularly in the accuracy of landing guidance. So successful were these changes that Apollo 13 was intended to land in more rugged terrain on the moon. Apollo 13 ran into trouble when an oxygen tank ruptured. They circled the Moon and were then brought back to Earth by the navigating technology of the mission control center in Houston, TX. The mission of Apollo 13 was accomplished by the crew of Apollo 14. On July 26, 1971, Apollo 15 was the first flight to implore the use of a lunar vehicle, which was an electrically propelled four-wheeled “lunar rover.” The Apollo 16 mission was launched on April 16, 1972, to set up experiments powered by a small nuclear station. The projected manned missions to the Moon by the U.S. were concluded with the flight of Apollo 17, on December 6, 1972. During their smooth 13-day voyage they discovered some unusual orange-colored soil which appeared to provide the first evidence of volcanic activity on the Moon. Thus the U.S. Apollo lunar-landing program came to a close. Eight years after President Kennedy’s national commitment, two men walked on the Moon. Ten more followed in the next three-and-a-half years. Six separate landing sites on the moon were explored and 838 lb.. of lunar samples returned to Earth for scientific study. Dozens of scientific experiments were performed on the Moon, and thousands of close-up photographs were taken. Seismometers left in four different locations continue to record and transmit data, powered by radioisotopes. Future historians may well consider the landing of twelve men on the Moon a critical point in the history of mankind- the first step in eventual manned travel to the planets and beyond.