Asbestos is a silicate mineral that has essential physical properties to be used in manufactured products. Throughout the twentieth asbestos was mostly used by contractors that constructed buildings and homes. Now it is commonly known that asbestos is linked to a number of various diseases and illnesses. The removal of asbestos from buildings and homes has turned into a very lucrative and profitable business throughout the late twentieth century and into the twenty first.

Fibrous minerals that fall under the asbestos category can be applied to both amphibole and serpentine mineral groups. The amphibole group 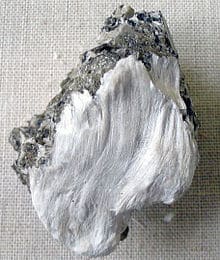 describes rock forming minerals that are typically dark in colour and hard. Three minerals that can be found in the amphibole group are crocidolite, tremolite and amosite (“Asbestos123,” n.d.)  In the serpentine group there is one principle mineral called chrysotile that accounts for 90% of the group. The factor that separates amphibole asbestos from serpentine asbestos is their chemical composition. Amphibole asbestos is composed of double chained silicates and contains a significant amount of iron (Fe). Amphibole asbestos and serpentine asbestos also have differences in their structure of fibers. Serpentine fibers are twisted and can differ in length. Unlike serpentine fibers, amphibole fibers are long and straight. They have a more malleable texture than serpentine fibers but can be jagged (“An introduction to asbestos science- The Facts.”, 2008). Both types of asbestos –amphibole and serpentine—come from the metamorphic rock category. Chrysotile is only one type of asbestos worth mining due to the profit it makes. The principle location that serpentine asbestos is mined is in Theftord Mines, a town of approximately 25,000 located in Quebec, Canada. (“Asbestos”, 2007)

Asbestos can be used in a variety of different products. Four notable qualities of asbestos that make it extremely valuable are its: resistance to heat, poor conductor of electricity, resistance to corrosion, and its malleability. These qualities make asbestos a perfect choice to be used in many different types of products. Manufactured types of products that use asbestos are insulation to protect against fires and prevent noise travel. Certain types of brakes use asbestos in their brake lining and brake pads. Asbestos can also be found in water tanks, to help stop corrosion. Certain types of paint also use asbestos in their product (“Abestos123,” n.d.)  Evidently, asbestos can be a valuable mineral to have in products.

How does Asbestos affect People

The inhalation of asbestos can result in a variety of different asbestos related illnesses. The two most notable are asbestosis and mesothelioma. Asbestosis is a lung condition which can vary significantly in terms of seriousness. Asbestosis can derive when consistent contact and inhalation of asbestos occurs. There are clear symptoms of Asbestosis, these include: lack of breath, chest pain, appetite loss, tiredness and nausea. Another disease that asbestos can cause is Mesothelioma. Mesothelioma is a cancer disease where a tumor grows on the mesothelium, the sack lining the internal body cavities. (“Asbestosis,”2008) Like asbestosis, mesothelium is also caused by inhalation of asbestos. Mesothelium also shows similar symptoms to asbestosis, these include: difficulty breathing, chest pain, a persistent cough, fever, weight loss bowel obstruction, swelling and nausea. In rare cases, some patients of mesothelium cancer show no recognizable symptoms at all. (“Mesothelioma Symptoms,” 2010)  All forms of asbestos are considered hazardous, but geologists have pointed out that the amphibole group has been deemed more dangerous. This is because their fibers are straight, jagged and can be long. This is obviously more dangerous than serpentine fibers, which are softer and curly. (“What is asbestos,” 2010)

If asbestos has been linked to a variety of different, severe illnesses than why not remove asbestos from areas where it is still being used? It has been suggested that the act of removing asbestos might actually be more harmful then not removing it. This is because when asbestos is in its absolute state, it can be effortlessly broken down into tiny inhalable fibers. When it is not in its absolute state which is when it is being used in different products, it cannot be broken down very easily. In the act of removing asbestos, you are extracting asbestos from its stable state and breaking it down into its absolute state. This causes asbestos dust; tiny airborne fibers of asbestos that can be inhaled or resettle in locations where more exposure occurs than its previous location. Because of this reason, it could potentially be a lesser health risk to leave asbestos where it is and not remove it than do attempt and remove it. (“A closer look at asbestos fibers,” n.d.)

Asbestos though it has desirable physical attributes is harmful to human health and should not be used in products. The serious health risks proposed by asbestos, especially amphibole asbestos outweigh its positives in the manufacturing industry. The removal of asbestos should be put to a close as there is sufficient evidence proving that the removal of asbestos is more dangerous than not removing the asbestos. Overall, asbestos is a useful mineral, but dangerous to human health.