Chloroflourocarbons were discovered in the 1920’s by Thomas Midgley, an organic chemist at General Motors Corporation. He was

looking for inert, non-toxic, non-flammable compounds with low boiling points that could be used as refrigerants. He found what he was looking for in the form of two compounds: dichlorodifluoromethane (CFC-12) and trichloromonoflouromethane (CFC-11). In both compounds, different amounts of chlorine and fluorine are combined with methane, which is a combination of carbon and hydrogen. These two CFCs were eventually manufactured by E.I. du Pont de Nemours and company, and, under the trade name “freon,” constituted 15% of the market for refrigerator gases.

CFCs were the perfect answer for cooling refrigerators and air conditioners. They were easily turned into liquid at room temperature with application of just a small amount of pressure, and they could easily then be turned back into gas. CFCs were completely inert and not poisonous to humans. They became ideal solvents for industrial solutions and hospital sterilants. Another use found for them was to blow liquid plastic into various kinds of foams.

In the 1930’s, household insecticides were bulky and hard to use, so CFCs were created because they could be kept in liquid form and in an only slightly pressurized can. Thus, in 1947, the spray can was born, selling millions of cans each year. Insecticides were only the first application for CFC spray cans. They soon employed a number of products from deodorant to hair spray. In 1954, 188 million cans were sold in the U.S. alone, and four years later, the number jumped to 500 million. CFC filled cans were so popular that, by 1968, 2.3 billion spray cans were sold in America.

The hopes of a seemingly perfect refrigerant were diminished in the late 1960’s when scientists studied the decomposition of CFCs in the atmosphere. What they found was startling. Chlorine atoms are released as the CFCs decompose, thus destroying the Ozone (O3) atoms in the high stratosphere. It became clear that human usage of CF2Cl2 and CFCl3, and similar chemicals were causing a negative impact on the chemistry of the high altitude air.

When CFCs and other ozone-degrading chemicals are emitted, they mix with the atmosphere and eventually rise to the stratosphere. CFCs themselves do not actually affect the ozone, but their decay products do. After they photolyzed, the chlorine eventually ends up as “reservoir species” – they do not themselves react with ozone- such as Hydrogen Chloride, HCL, or Chlorine Nitrate, ClONO2. These than further decompose into ozone hurting substances. The simplest is as follows: (How do CFCs Destroy the Ozone)

The depletion of the ozone layer leads to higher levels of ultraviolet radiation reaching Earth’s surface. Therefore, this can lead to a greater number of cases of skin cancer, cataracts, and impaired immune systems, and is expected to reduce crop yields, diminish the productivity of the oceans, and possibly contribute to the decline of amphibious populations that is occurring in the world. Besides CFCs, carbon tetrachloride methyl bromide, methyl chloroform, and halons also destroy the ozone.

In 1985, the degradation of the ozone layer was confirmed when a large hole in the layer over Antarctica was reported. The hole’s existence is due to industrial chemicals which were

manufactured there. During September/October of 1985, up to 60 percent of the ozone had been destroyed. Since then, smaller yet significant stratospheric decreases have been seen over more populated regions of the Earth.

Worldwide monitoring has shown that stratospheric ozone has been decreasing for more than 20 years. The average loss across the 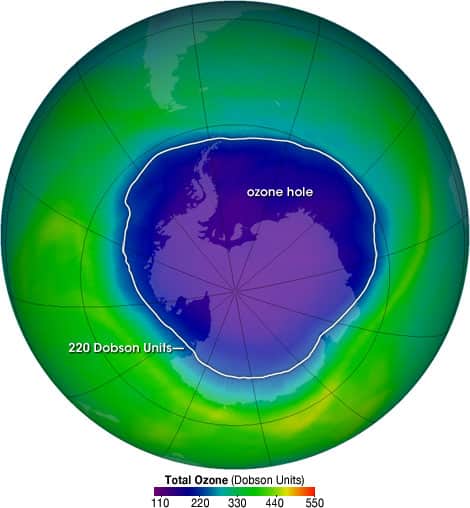 globe totaled about five percent since the mid-1960’s with cumulative losses of about ten percent in the winter and spring. A five percent loss occurs in the summer and autumn over North America, Europe, and Australia.

The world has been forced to address this issue. Thus, the major powers of the world created a global treaty, the Vienna Convention for the Protection of the Ozone Layer. The agreement was put into effect in 1988 and the subsequent Montreal Protocol on Substances that Deplete the Ozone layer went into effect in 1989. To date, 140 countries are acknowledging the Montreal Treaty. The countries decided on a timetable for countries to reduce and to end their production and consumption of eight major halocarbons. The timetable was accelerated in 1990 and 1992. Various amendments were adopted in response to scientific evidence that stratospheric ozone is depleting at a much faster rate than was predicted.

On the home front, the U.S. Environmental Protection Agency (EPA), under authority of the U.S. Clean Air Act, have issued regulations for the phase out of production and importation of ozone depleting chemicals. The EPA established various policies such as refrigerant recycling in both cars and stationary units, a ban on nonessential products, labeling requirements, and a requirement to revise federal procurement specifications.

(1)   Anyone repairing or servicing motor vehicle air conditioners must recover and/or recycle CFCs on-site or recover CFCs and send them off-site for recycling.

(3)   Retailers can only sell cans of automotive refrigerant (less than 20 pounds) to certified technicians. This discourages do-it-yourselfers from topping off their own A/C.

The fines for violating any of these rules can run as much as $25,000 per violation.

If someone wants to keep working on A/C, they will have to make an investment in equipment. Is it worth it? Recovery-only units cost about $500 and recovery/recycling units run from $1,800 to $5,000. People working on air conditioning units must pass an EPA-approved CFC recycling course. CFC-12 used in motor vehicles was phased out of production at the end of 1995. No more will be made.

CFCs, when first developed, were thought to be a miracle compound. They made excellent refrigerants, pesticides, deodorants, packaging foam, and had many other uses. Unfortunately, a hole in the stratosphere was found over Antarctica in 1985, and CFCs were to blame. Since 1989, numerous laws and restrictions have been made to stop production of CFCs and allow the ozone in the stratosphere to replenish itself. Fortunately, the laws and restrictions have been effective and the ozone layer is slowly but surely filling in. The future of the ozone layer looks good indeed.