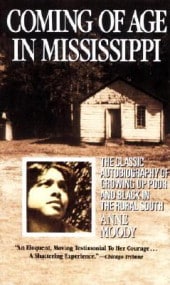 primarily on the experiences of racism and daily struggles from a child’s perspective to the hardships of being black during these times of racial inequality and despair. Aunt Moody’s life of struggle is definitely an inspiration to everybody seeking a change in their society because she was an active NAACP and CORE member and activist fighting against injustice. Her purpose in writing this book was to help people understand her life and the continuous discrimination and hardships that blacks had to face during these horrible times of racism.

Some are born with it and others have to earn it the hard way. This was exactly the way Anne Moody saw it. Even though she had to start working at an early age due to the fact that her father deserted her family and left them to support themselves by doing whatever they have to do to survive. Coming of age in Mississippi is filled with examples of the hatred that existed between blacks and whites in the 1960’s and 70’s not written by an individual simply analyzing the situation but by an individual exposed to racism first hand throughout her whole life and having to live with the fact that if you are black, you are less than white. Well, Anne Moody was always a rebel and did not agree with the thoughts that her mother had about the world, which are some reasons why she got involved in activities and movements trying to support and help the common black man.

The book Coming of Age in Mississippi is not in any way based on statistical data but just on the experiences and views of the oppressed. Statistical data in this case does not really matter nor does it influence the cause in any way because the hatred toward another being or racism cannot be classified into a category as statistic data but rather a feeling or brainwashing which is exactly why this book was so great in explaining and showing the amounts of hate and rejection that blacks faced during these times.

Aunt Moody depends primarily on the facts and experiences that are going on around her and that have been influencing her ever since she had to work for white people to support her family. As a child she developed questions that have to do with race such as to why white people are all in good financial standing and why Anne and her family have to live in famine. Her mother was no help toward this subject whatsoever because she was aware of the cause and that it is the way it is. Anne challenged that point of view because of her mother’s ignorance and disbelief that change is inevitable but that it can be achieved if organization and the powerful will are present.

This story is written in first person point of view as the author is telling the story about her life. Anne Moody clearly paints a picture of racial inequality in the South of the 1950’s and 60’s because she experienced it first hand. There is a huge difference in hearing about a problem and experiencing the problem first hand like Anne Moody did. Her choice of mythology is absolutely fabulous. As a matter of fact, had she used a different choice of writing, I would probably have not been as interested as I was. She tries to relate to the reader by painting pictures of the cruel injustice in the readers head and she achieves nothing but attention. The cruel and unjust life that Anne Moody leads during these times is somewhat similar to what every one of us goes trough on a daily basis. Such as fight for survival, the constant struggle to be better than the other, the racial discrimination that we still face today, etc.

It’s amazing how the reader can gather so much valuable information about injustice, the racial discrimination and the movements and resistance of blacks during these times of struggle by just Anne writing about her life and her experiences. Anne Moody had an exiting life and whatever she was doing; she was always in the middle of it. That is why the methodology that she is using is so extremely effective because racism cannot be analyzed it can only be experienced.

I do not think that Anne Moody is missing anything in particular in this book. It is very organized and flows very smooth. The way of writing clearly gets the message across and all my questions have been nicely and in a timely manner been answered as I proceeded to read the book. The only thing that I personally would have wanted to see more of is less family issues and more of the issues at hand which is racism. But then I thought about this and came to the conclusion that it is all tied together. For example, the unjust treatments, the lack of opportunity, the segregations such as the one that occurred in the movie theater and other actions and causes that make me realize and come to the conclusion, that it is all in fact tied together and that without the actual family evaluation and background, this book would not hit the spot as much as it did with it.

Anne Moody has somewhat of a weird way of defining the problems in the book. As I was reading the book it seemed to me as if she was not even trying to state the problems but rather identify the situation to the reader and so that the reader can make up his/her own mind about the situation. She does not get into the details of the problems until later in the book after she has joined the activist groups where she clearly identifies the problems, the causes and the effects. Anne Moody’s sympathies and antagonism are aimed at both individual groups. They are aimed at blacks and also on whites. She is furious about the white supremacy and the way that the blacks are mistreated yet she is also disappointed and shows a certain form of hostility towards blacks because of their lack of interest and perhaps their fears of change. She is somewhat of an individualistic rebel that does classify herself with neither whites nor blacks due to her mixed feelings about northern whites and doubts about the direction of black liberation.

The body of the book and the language of the book are not particularly written in any form that would identify them with a particular school of thought. The reason for this is that Anne Moody never thought of herself as a writer, but rather as a civil rights movement activist. The language of this book is not considered highly intellectual but is written for the main and if not sole purpose of showing the new generation how it was and what they could do to overcome this great discriminative society.

This book deals with one of the biggest issues of the century. It deals with primarily racism during the time of Anne Moody and the troubles and racist behavior that she was exposed to. I can relate this book to numerous experiences even in today’s world where supposedly racism has been overcome. It has not been extinguished, it has only been watered down so it is politically correct but the views and hate are unfortunately still the same.

This book relates to some of my past experiences in the United States about a certain time when I was pulled over in Sacramento for falling into a category of Russian’s that have been anonymously tipped to the police. Automatically after they have noticed that I have a little bit of accent, they proceeded to act it out as if I was the criminal himself, this is very similar to the writings of Anne Moody where she writes that all blacks are automatically segregated into a category where they are only able to do the things that were supposedly “destined” to do, such as slave labor, etc. The book Coming of Age in Mississippi deals a great deal with everything that one goes trough on a daily basis. Hate, mistrust, obligations to certain people, discrimination are just some of the things that Anne writes about that occurred during her time and that are also occurring in today’s world.

The story ends with Anne Moody being exhausted to death from rallying, protesting, marching, organizing that she was unsure of what she had accomplished. She had led a life before that where she ignored the fact that blacks were oppressed even though the thought always simmered in the back of her mind. She had lost everything including her materialistic objects and possessions and almost her health because of this fight for civil rights. The ending was really sad because people have sacrificed a lot for this cause like for example Mrs. Chinn and C.O, Moody and they have not even scratched the problem. The solution that Moody comes to is that she is aware of the fact that the white man controls everything and after her sitting on that bus heading for Washington and looking at little Gene, remembering how she was once just like him. She fought and fought and had not achieved anything and it bothered her because she was a person that accomplishes and survives and with Anne Moody being as smart, motivated, and with her fighter spirit soaring, this was a big task that she could not overcome and it bothered her, thinking if maybe she should give up the fight against the white man for the civil rights.

I agree with Moody where she to a certain degree loses her interest in everything and is trembling with fear deep down inside, not knowing what to do or where to go. She had dedicated her life to the cause of fighting and achieving human civil rights and she was exhausted. Moody says in her other book and this quote really got me thinking about racism even more is “…that we made a few visible little gains; yet at the root, things always remained the same; and that the movement was not in control of its destiny, nor did we have any means of gaining control of it. We were like an angry dog on a leash that had turned on its master. It could bark and howl and snap, and sometimes even bite, but the master was always in control.”