Bishop Francis X. Ford was a well educated, enormously gentle man that was kicked, beaten, insulted, and surrounded by hatred.  All this because of one man’s beliefs.  He was born in Brooklyn in 1892.  He was the founder of the Maryknoll Missionaries and was the first bishop of Kwantung, China.  He was killed in the late 1950’s in China, he was charged with anti-Communist, counterrevolutionary, and espionage activities, his real “crime” was for being a Christian and a foreigner.

During his life Bishop Ford illustrated the cardinal virtue of fortitude, which is the ability to overcome fear in order to pursue good; “it is active 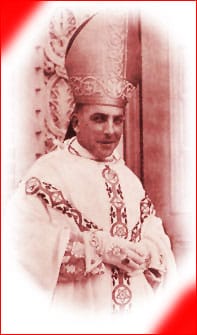 sake to overcome evil for the sake of god’s kingdom” said Huggard.  When he took office in China, the country was already feeling the effects of the massive Japanese advance across Asia.  In a short time millions lost their lives and were driven from their homes.  Bishop Ford refused to leave the war-torn country, even after the Japanese attack on Pearl Harbor brought the United States into the war.

During this time he distinguished himself by the way he cared for war refugees.

Chinese paid a terrible price during this war with Japan, but even more costly was a civil war that followed.  Bishop Ford exemplified the virtue of fortitude, by not leaving the war-torn country and staying to try to pursue good.

During this time of war, many would wonder what was the reason for him to stay in China, and what was his way to live?  In the Novel A Mans Search For Meaning, Nietzsche   says “he who has a way to live can bear with almost any how”.  If Ford had left the country during the time of war, there would have probably been no hope for the war refugees that didn’t have the option to stay or go.  His way to live was not to save himself, but to save others.  In the Novel Frankl describes the human person as a meaning maker, who has the last human freedom namely to choose one attitude in a given set of circumstances.  In 1950, he moved from his Diocese in Kaying China, to a political prison in Canton 200, miles away.  At every stop along the way he was put on public display and humiliated.  His attitude during these stops was not to give and let the humiliation make get to him, but to use it as a stepping stone to fight harder, he did the inevitable he used the humiliation to make him better.

In his life he exemplified many of the things Frankl wrote about, but he also depicted many of the quotes in the hallway of Kellenberg Memorial High School.  There is one quote that stood out to me more than any of the quotes on the wall it is……….”Don’t follow where the path may lead ……go instead where there is no path and leave a trail”.

When Bishop was young he developed his own idealism.  While a student in Cathedral college in New York he took an interest in the Christian Foreign Mission Society, this society was new and had few members.  At the age of 20, he became the first seminarian of the Maryknoll Missionaries to go abroad.  In time, many followed and the missionaries began a movement to Christianize foreign lands.  Bishop Ford is consider the pioneer of this movement. Just like the quote said, he led the path…..and many followed.

Bishop Ford died at the mercy of those who despised him, with-out any comfort or support.  His death was martyrdom it’s truest sense, despite the isolation and horror he held to his beliefs.