Aldous Huxley’s Brave New World presents a portrait of a society which is superficially a perfect world. At first inspection, it seems perfect in many ways: it is carefree, problem free and depression free. All aspects of the population are controlled: number, social class, and intellectual ability are all carefully regulated. Even history is controlled and rewritten to meet the needs of the party. Stability must be maintained at all costs.

In the new world which Huxley creates, if there is even a hint of anger, the wonder drug Soma is prescribed to remedy the problem. A colleague, noticing your depression, would chime in with the chant, “one cubic centimetre of soma cures ten gloomy.” This slogan is taught to everyone, from the youngest to the oldest. Unhappiness, intellectual curiosity, disagreement, suffering – none of these feelings is allowed in the world which Huxley creates. At the first sign of unhappiness, Soma is prescribed. Emotions of all types are strictly controlled to provide stability and predictability within the population.

Another of the panaceas for social ills is the belief that everyone would enjoy his or her work because he or she was “made” or trained for it when young. Consequently, from birth, everyone in Brave New World is slotted to belong to a specific social and intellectual 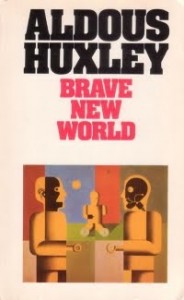 strata. In conjunction with this idea, all births are completely planned and monitored. There are different classes of people with different intelligence and different “career plans.” The social order was divided into the most highly educated, the Alpha+, and then in descending intelligence, the following divisions: Alpha, Beta, Beta -, Gamma, Delta, and Epsilon, which is the last group comprised of those citizens of the lowest intelligence who are necessary to perform society’s most menial jobs.

Another of the problems with the society which Huxley depicts is that the people do not have individuality. They are all conditioned by subliminal messages and artificial stimuli to respond the same way. Although all people are meant to respond identically without thinking, a few are made ‘imperfectly’ and, as a result, do have personalities. These people violate the principles of technology and artificial personalities and consequently have to be sent away so as not to “contaminate” others. To maintain order in Brave New World, the Resident Controller must have complete authority over more than just the present; he must also have influence over the past. In order to be able to achieve this, he must be able to rewrite history. This gives rise to one of the most famous quotation from Brave New World, “All history is bunk.” The ability to rewrite or “edit” history is not so far distant from our current technological society. A simple stroke of the computer keyboard can make a global change in information disseminated on a network or to thousands of electronic bulletin board subscribers. Being able to distinguish the true from the false is becoming increasingly difficult. Brave New World focuses constantly on the question of whether technology requires a sacrifice of human individuality. In this novel the reader is keenly aware of the dangers that homogeneity poses to the quality of life. People may enjoy life with technological advances, but if they are required to forfeit individual personalities or interpretations about life, Huxley makes us see that life will become meaningless.

In comparison to 1984, Brave New World makes the technology less obvious to the members of the society themselves. The characters in Brave New World participate willingly in their manipulation by the government. They happily take the wonder drug Soma, “the wonder drug.” In contrast, in 1984 the people seem to sense they are being controlled by Big Brother, but here the domination is imposed on them by the government.