Traditionally, Brave New World presents an undesirable and horrific society portraying a future quite uncomforting; this is an irrefutable fact but the depiction is ambiguous enough to establish a justifiable argument towards the antithesis. Art is abolished, and this is a terrible thing, but something must be said of the satisfaction and efficient stability of the residents of this seemingly hostile environment. Of course it is undeniable that this is a futuristic nightmare, and the residents may have been “programmed” to artificially condone their surroundings, but this specific interpretation does leave room for argument.

The citizens of this society are pleased, at least artificially, with their world. The savage serves as a metaphor for a completely different lifestyle, 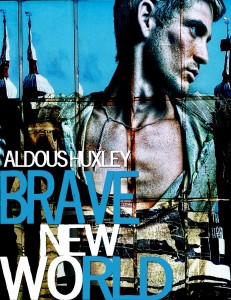 which the residents view as inhuman and primitive compared to their benevolent modernism. Consider the term “mother” to serve as a chief variable for my example. This is a term regularly associated with John and with his neighbors, yet completely alien to the citizens of this world and met with contempt, discouragement, and confusion. When John’s mother was dying in the hospital and John was by her bedside weeping because of the inevitable passing of a loved one, the children being conditioned for death as standard of their upbringing find John’s behavior incomprehensible.

These people are happy. They live in a world that has sacrificed art and science, and such a sacrifice from the reader’s point of view is unbelievably fascist, but when science and art is rooted out of nature, passion, and general tendencies, than what does it matter. For ignorance is bliss, so they say. When Othello and The Tempest are torn out of memory and out of a bleeding artists’ heart, who will cry for it anymore. Freedoms are limited indeed, for several generations must have suffered when such masterpieces and natural comforts where in the early phase of abandonment, but heaven on earth is the meaning of life, right? There is a justifiable sarcastic tone presented, for it is utter nonsense. What you know cannot hurt you, but it also cannot help you. Free will is the betterment of society. These contemporaries of this society notice the superficial promise of fascism as the road to eternal happiness, and the amount that is sacrificed portrays this society as an enemy to free will.

All in all, the main goal of Huxley was to present a dystopia, which he did well, but there is another ambiguity and interpretation to present an argument for both sides. One may say that these citizens are happy with their world, but to associate them with that world would mean to deem them computers, for this is the underlining definition of a computer: lacking free will, artificially conditioned, possessing a dead passion for the preservation of art and beauty. Humans cease to be humans when they are empty of moral choice, and this society ceases to nurture human beings, only some new species of lifeless mechanisms.