The end of Brave New World contained a lot of exciting components. In Chapter 13 Lenina remains confused by how she might be in love with one man. She is finally ready to sleep with John. After taking soma, she goes to seduce John, and John talks about how he wants to grow old with her. The concept of this absolutely horrifies Lenina. I think this shows how despite Lenina wanting to be in love with a savage like John, her society has trained her so that she cannot actually love in the way John hopes for.

Most of the next chapter consists of John visiting Linda in the hospital. This was in my opinion one of the saddest 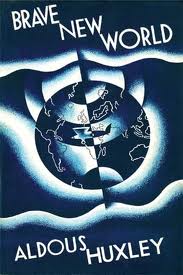 scenes in the novel. Obviously for the most part Linda is unable to even say who John is, and then she finally remembers. However, by this time it is too late, and Linda chokes and dies, while reciting a Shakespeare verse. John gets so emotional after this that he pushes a child to the ground, and rushes out of the hospital. The way in which the boys asks John if his mother is dead says a lot about the world state. The way in which this question is posed show how the world state completely dehumanizes death to the point where when someone is lost it is not even a big deal.

Chapter 15 illustrates the disdain which John feels towards the society even more. When he sees more Delta twins he is absolutely disgusted. He cannot believe how many of these creatures are roaming around. John’s fury causes him to throw his rations away angrily and he is attacked by Deltas. This leads to a tussle which results in John being taken away by police. When John throws away his soma ration and infuriates the deltas, he is making one big statement. He is essentially saying he would rather see regular human relationships and struggles than the soma induced slavery which people live in. However, people disagree with him as the gentleman who arrests him says “And if anything should go wrong, there’s soma. Which you go and chuck out of the window in the name of liberty, Mr. Savage. Liberty!”

Chapter 16 is probably the most critical point in the book. In this chapter Mond explains several realities to John and his group. He talks about how as a consumer based society, texts like Shakespeare must be illegal. Shakespeare is too old for a society which values new things, and therefore is forbidden. To me this idea didn’t really make much sense. I just don’t understand how consumerism should affect the literature which we read. From Mond saying that Shakespeare is illegal, I felt like the true ideas of the dystopia were showcased. The world that Brave New World takes place in is merely the same as ours, but with all the worst features.

In the final chapters of the book, I felt one of the most important ideas were really unveiled. The concept that everyone’s existence on this planet is pointless is developed in this chapter. In this novel, the inhabitants of this world live only for the purpose of gratification. They have no purpose other than to satisfy their needs. Huxley is stating towards the end of the book that we are inevitably heading towards a world of unbelievable consumerism. Huxley was showing that the way in which the world was modernizing was not leading to a positive outcome. Human nature Huxley believed was going to lead to a truly negative shift in human nature. Human nature will essentially not exist, and people will become dehumanized.