Chiang Kai-shek, also known as Chiang Chung-cheng, was the son of a middle-class wine merchant who lived in the village of Chikow in Chekiang Province. When he was fourteen years old, following the Chinese custom of that time, he was arranged to be marry by his mother (the bride’s name is not mentioned). His bride and he did not see each other until his walk down the aisle. He did this without complaints only to please his mother. Once he was married he met his bride’s parents, as was tradition.

Due to Chiang’s bad temper, the meeting ended in arguments between Chiang and his bride’s father. Once home he tried to keep his mind off 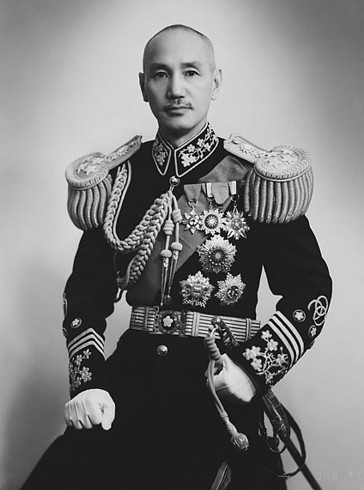 of the marriage and concentrated more on what kind of man he wanted to become. He dreamed of becoming a soldier. He saw adventure in a military career and felt comfortable with the demand for authority, order, and strength. Though his family objected and hoped for him to study law, he went off to Tokyo Military Staff College in 1907. There he became a follower of the revolutionary leader Dr. Sun Yat-sen. This encouraged him in 1911 to take part in the revolt that established the Chinese Republic. In 1917 when Sun established the Guangzhou government, Chiang was his military aide. Sun sent him to the USSR to study Russia military methods and was more than willing to go. He got a good response from the people there. Not only did they give him advice but they also sent thirty or so military men as help. One of these men, named Michael Borodin suggested that they start a military academy in China. They placed it in Whampoa and named it the Whampoa Military Academy. Their main goal was to demand and deserve respect. Once opened they received 1,500 applicants. It planned to register only 300.

Sun began to encourage Chiang’s participation in the Nationalist party. After Sun died in 1925, Chiang became a powerful figure in the it and in 1926 took command of the Nationalist army. This was called the Northern Expedition, entering into Shanghai, Hankou, and Nanjing. Chiang initiated the long civil war between the Nationalist government and the Communists.. This was ended in 1936 by General Chang Hsueh-liang who hoped to unite in defense of the approaching Japanese. Many felt that unity could not be achieved unless Chiang were removed as commander-in-chief even before the expedition was completed. To avoid such humiliation, he resigned from his position. He issued a public statement to the newspapers. It said, “I am willing to sacrifice my position in order to assist the unification of the party and to make possible the accomplishment of the chief objective of Kuomintang.”

With Chiang’s mind no longer focused on the political issues he could now focus on himself. He decided to ask a young woman named Mayling Soong to marry him. He was no longer married to his childhood wife and now wanted a companion. First he had to get the approval of Mother Soong. She disagreed with his age and religious beliefs but eventually, happily gave her approval for their marriage. On December 1, 1927, they were married in the Soongs’ Shanghai home.

Chiang continued with his political mission with Mayling at his side. Her knowledge and beauty helped him through his journey. Soon after his marriage Chiang gained back command of the Kuomintang army and continued heading north. In 1928 his army reached Peking and being the chief of the Nationalist party, he became head of the Republic of China. After many years and many hard battles he finally made peace with Japan. In the process he was elected China’s president in 1943 and reelected in 1948. When the Communists won control of China in 1949, Chiang escaped to Taiwan and set up a Nationalist China government there. Chiang was reelected in 1954, 1960, 1966, and 1972. He died on April 5, 1975 after being ill since 1972 and left his official duties to his son, Premier Chiang Ching-kuo.