A Chinese medical technique; acupuncture is a medicine originating in the orient over four-thousand years ago. Used primarily for pain relief, 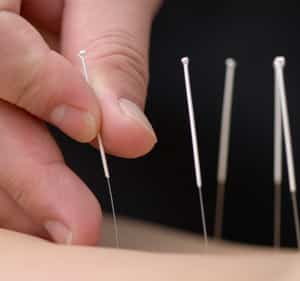 but also in curing disease and general health improvement. Oriental Medicine views (illness and pain) as an imbalance of one’s energy. With Acupuncture the energetic balance can be restored, thus helping the body to rid itself of disease. Often illnesses can be diagnosed and treated at an early stage. Acupuncture consists of inserting hair thin needles through specific spots in the skin called acupuncture points. These specific spots of insertion are over neuroreceptors in underlying muscles. These needles are inserted along meridian points throughout the body; There are hundreds of these meridians, all serving different purposes. “Evidence proves that needling simulates peripheral nerves in the muscles which send messages to the brain to release endorphins (morphine- like peptides in the brain). These natural chemicals then block the sending of painful messages from the brain.” (Acupuncture-Microsoft Network Nov. 30, 1996).

Acupuncture needles are typically inserted 1/10 to 4/10 on an inch deep. Although some procedures require needles to be inserted as deep as 10 inches. Acupuncture points are then stimulated by various forms of needle stimulation. Acupuncture is an incredibly effective form of medicine; This essay will present details explaining some of the uses of acupuncture. Acupuncture; the insertion of needles into the body through specific spots, over neurorecepters. These needles are then stimulated by either: rotation, heat, or by a weak electrical current. Acupuncture is a medical technique used primarily as a relief of pain, but is known to cure disease, as well as improve general health. “The theory suggest that acupuncture blocks the transmission of pain impulses from parts of the body to the central nervous system.” (Compton’s interactive encyclopedia). Three main sites have been found for endorphin acupuncture analgesia. This type of acupuncture blocks the sending of pain messages from the brain. The pituitary gland being one; this gland, when stimulated by needles, releases endorphin. The second site are the periaquaductal gray neurons in the mid brain which release endorphins when stimulated. The third, electrical stimulation to the spinal cord endorphin system. The spinal cord releases endorphins to block the release of neurotransmitters, which carry the painful messages from the brain.

Acupuncture, used in Asia for over four thousand years; Originally for the relief of pain. “Acupuncture appears to be undeniably effective in relieving pain.” (Compton’s interactive encyclopedia). Western observers witnessed, ordinarily painful surgical operations carried out on fully conscious patients. These patients were only locally anesthetized by acupuncture and exhibited no signs of discomfort. The reason for acupuncture’s success is not known, except for the belief that acupuncture needles stimulate the body’s production of such natural pain-killing chemical substances as endorphins and enkephalins.

Acupuncture; known to cure disease and improve general health. With the enormous problem of high blood pressure in the United States, acupuncture has been very effective in the control of pressure; aiding Americans in the fight to keep their blood pressure down. In many arthritis patients, acupuncture has almost completely eliminated the pain and suffering. We as a society understand the problem with obesity in the United States; acupuncture successfully aided in the control of appetite. “At one time acupuncture was believed to be related to hypnosis, but extensive experiments in animals undergoing surgery in veterinary hospitals have disproved that theory.” (Compton’s interactive encyclopedia). Meridians; the entire theory of acupuncture is on the belief of these meridians. These “meridians” are energy trails or channels throughout the body; believed by the Chinese to hold the opposite forces Yin and Yang, acupuncture keeps these two forces in balance. For example, the ancient Chinese designated that a master force or vital energy called Ch’I coordinates and controls the fundamental activities of different organs in the body. Modern physicians have a difficult time accepting these elaborate systems of fanciful theories developed thousands of years ago to explain the mechanisms of acupuncture. Modern science teaches that the nervous system and various hormonal substances perform the functions that these ancient doctors attributed to Ch’i.

These energy channels are like rivers flowing through the body to  irrigate and nourish the tissues. An obstruction in the movement of these energy rivers is like a dam that backs up in others. The meridians can be influenced by needling the acupuncture points; the acupuncture needles unlock the obstructions at the dams, and reestablish the regular flow through the meridians. (Acupuncture-Microsoft Network, Nov. 30, 1996). Stimulation of acupuncture needles; once all the needles are inserted for the specific meridian, the needles must be stimulated. The stimulation is what causes acupuncture to be so effective. There are several ways in which stimulation is reached: One being, a gentle twirling motion. The physician, by use of his/her fingers gently rotates the needles. Second, there is heat stimulation, the physician heats the needle with a cigar looking tool designed specifically for acupuncture. Third, electrical stimulation; the physician agitates the needles with a low powered 2 hz electrical current.

The physician connects the needles to a low output electrical stimulation machine. Stimulation is key to the success of acupuncture. Acupuncture, a medical technique originating in the Orient, more than four-thousand years ago. Used primarily for reduction of pain, but to cure some disease, as well as improvement of general health. The most spectacular reason for acupuncture’s success is: Stimulation of needles by the acupuncturist. Stimulation of the meridians; the rivers of energy throughout our bodies. These rivers get stopped up from time to time, acupuncture is the key to clearing the stop… Acupuncture a method of encouraging the body to promote natural healing and to improve bodily functions.