Nobody knows the exact origins of vinegar, but there are many stories and beliefs surrounding this strange liquid.(Oster 3) The Roman Army was recorded to have mixed vinegar with water to make a sort of Gatorade for the soldiers.

In the eighteenth and nineteenth century United States, similar drinks known as “shrubs” or “switchels” were made by field laborers. 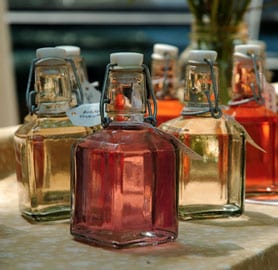 To make these drinks, they mixed either fruit juices or water, with sometimes salt, and fruit-flavored vinegars.(Oster 4) The earliest recorded use of vinegar, however, was in Babylonia around 5,000 B.C. There, it was typically made from dates, and commonplace as a medicine.(Oster 3)

Throughout history, vinegar has been used medicinally. Via modern science we know vinegar to have antibacterial and antiseptic properties.(Oster 5) But before the convenience of laboratory analysis, Hippocrates (commonly called the father of medicine) recommended vinegar to his patients. One such recommendation was a vinegar, honey, and pepper douche for “feminine disorders.”(Oster 5) Folklore has it that during a plague epidemic in Marseilles, four robbers drenched themselves with what is now known as “Four Thieves Vinegar.” In doing so, legend say that they were able to pilfer the diseased and deceased without getting infected themselves.(Geddes) In the Civil War, vinegar was issued to counter scurvy. More recently, in World War I, vinegar was commonly accepted as treatment for wounds.(Oster 5)

Other more modern medicinal uses for vinegar also exist. A mixture of apple cider vinegar and water, if used properly, can help reduce acne problems.(Geddes) A similar solution has been known to help with indigestion if taken regularly.(Oster 42) Cold apple cider vinegar can also help relieve the pain of sunburns.(Geddes)

Vinegar also has many uses around the house. Because vinegar is acidic by nature, it is very useful for a spectrum of cleaning uses and other tasks. Vinegar is relatively inexpensive and, by comparison to the mass-produced toxic chemical cleaners, potent. For most home uses, one would usually dilute the vinegar in water. A one gallon bottle of apple cider vinegar could replace a whole box full of harmful chemicals found littering the common home. Vinegar can both remove stains from wooden furniture and act as polish.(Oster 33) When your drain gets clogged, you don’t need to buy the toxic liquid plumber. You can pour a handful of baking soda down the drain, add a half a cup of vinegar, and then cover the opening for five to ten minutes. Doing this will unclog your drain.(Geddes)