When the railroads moved west to the Great Plains, the “Cattle Boom” began. Southern Texas became a major ranching area with the raising of longhorn cattle from Mexico. Cattle were branded by the rawhides who guarded them on horseback on the ranges.

Before the Civil War, small herds of Texas cattle were driven by the cowboys to New Orleans, some as far west as California, and some

to the north over the Shawnee Trail. This trail passed through Dallas and near the Indian Territory, ending in Sedalia, Missouri. In 1866, the Shawnee Trail presented some major problems for the cattle drivers Farmers along the route did not like their fields being trampled. They also objected to the spread of tick fever. Longhorns carried the ticks but were immune to the fever. A few farmers were so angry, they armed themselves with shotguns to convince the cattle ranchers to find another trail north.

There was a large increase cattle by the end of the Civil War. Over 1,000,000  cattle roamed the open range. At this time, people in the north had money to buy beef and cattle which was in great demand. A cow that cost 4 to 5 dollars a head in Texas was going for 40 to 50 dollars a head in the east. Ranchers hired cowboys for the cattle drives north, realizing the great opportunity for a large profit if they could reach the railroads in Abilene, Kansas.

Joseph McCoy, a stock dealer from Springfield, Illinois, decided a new trial was necessary west of the farms. In 1867, he chose a route that would reach Abilene and the railroads with the least amount of problems. This route was to become well-known as the Chisholm Trail.

Jesse Chisholm was a Scotch Cherokee Indian trader, who in 1866 drove a wagon through the Indian territory, known 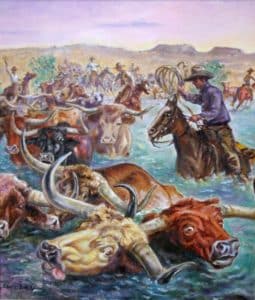 now as Oklahoma, to the Wichita, Kansas, where he had a trading post. Cattlemen use the same trail in the years to come, following Chisholm’s wagon ruts to Abilene, Kansas, and the railroads. The trail began below San Antonio, Texas, and stretched north for about 1,000 miles. The main course then passed through Austin, Fort Worth, The Indian Territory, and Wichita to Abilene. Side trails fed into the Chisholm Trail. The cattle fed on grass along the trail.

Cattlemen moved about 1,500,000 cattle over the trail during a three year span. The biggest year was in 1871, when 5,000 cowboys drove over 700,000 head of cattle along the trail from Texas to Abilene. The Chisholm Trail was the most popular route because of the good terrain. There were no hills or woods to impede to cowboys’ progress, nor where there towns or farmers along the way.

READ:
Battle of Midway in the Pacific: History & Significance

The cattle trail route moved westward as the railroads across the plains moved west, and settlers soon followed. Ellsworth and Newton, Kansas, on the Atchison, Topeka and the Santa Fe Railroad became the end of the trail for cattle drives between 1872 and 1875. Here were the chief cattle markets for several years. There “cowtowns,” as they were called, consisted of gambling halls, saloons and brothels. It was a good place for cowboys to spend their pay at the end of a long drive.

In time the railroad moved even further west. Farmers homesteaded the land and put up fences, barring cattle herds. The Chisholm Trail soon ceased to be used by 1890, but will be remembered in western stories and songs. This trail was very important to Texas. It helped the state recover from the economic blows of the Civil War. It also helped stock new ranches to the north and it met the nations demand for beef. It is responsible in part for the rise of Chicago and Kansas as packing centers. It also led to the expansion of western railroads and the development of refrigerator cars.

Although Jesse Chisholm’s role in the “Cattle Boom” is very insignificant, the trail named for him played a major role in American History.

I suggest you work on your history a bit and revise this material. First, don’t refer to Jesse Chisholm as a half-breed – that’s disrespectful, and perpetuates bad stereotypes. He was Scotch/Cherokee. He worked as an interpreter between the Republic of Texas and the United States government in their dealings with Indian tribes in the territory for two decades before the Civil War. He also had a number of trading posts throughout Indian territory, and was an essential translator among the various Indian tribes (who spoke different dialects) and the soldiers. He was the Sam Walton of his era. Another… Read more »