In the process of choosing a President, there are three phases, the campaign, the general election, and the declaring of the president. The first step, the campaign, is a long and strenuous process. A campaign generally begins 20 months before the actual presidential election. In the early months, a candidate will raise funds and make his name 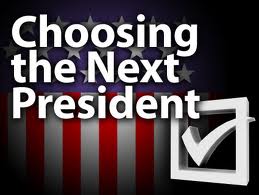 known to the public. After a year of raising funds and making their names known, the primaries start. At this point, a candidate will decide whether or not he or she have had enough success to continue. Eventually, as the primaries continue to unfold, a candidate is chosen as the presumptive nominee from each party. This means that the party will begin to debate and scrutinize an opponent from an opposing party instead of a candidate from within their own party.

The two most important components to campaigning are advertising and fundraising. The purpose of advertising is obviously to sway the voting population toward the particular candidate’s ads. This process can be done through positive advertisement or negative advertisement. Barack Obama is a major advocate of positive advertising. In this form of advertising, a candidate will say what he or she stands for and will show why what he or she is doing is best for the United States. This form of advertisement will always be effective as it gets the message across and does not upset anyone. In negative advertising, a candidate will show what he can do for the country, while at the same time, questioning several things about the opposing candidate. This is something that has often been done by Hillary Clinton during the election campaign. This is a high-risk, high-reward style of advertising, as it can either make people question the opposing candidate or can anger people immensely. Sometimes, these ads wind up being pure fallacy and this upsets many people.

The other major feature, fundraising, is done throughout a campaign. Candidates will barnstorm through several states in order to raise funds to run advertisements and hold events. Candidates will go through states which they deem to be important and this makes a big difference in the long-run. For example, if John McCain spends a lot of time campaigning in Utah and Barack Obama does not, then Utah will undoubtedly fall to McCain. It is very important for candidates to decide which states they believe are contested and which they believe they cannot win. If a candidate and his advisors do a poor job on this issue, then they will undoubtedly lose the election. This will occur because they did not use their fundraising money in the proper states.

The general election is also a lengthy process in its own right. There are three different types of balloting in the United States. The first type, mail-in ballots, is a method which is becoming more popular, after several debacles involving other systems. This system uses “snail mail”, in which ballots are sent out and then sent back through a ballot box, or alternatively, through e-mail, which is used commonly in states such as Oregon. The mail-in system has been considered the most efficient and reliable. There is also the punch card system. This is a system which has been denounced as being “fraught with errors”. This system caused a large amount of grief in Florida in 2000, when the machines in the system were not correctly counting votes. The final system is the Direct-Recording Electronic System. In this system, there is a touch screen and the votes are counted using an internal computer. This system is full of advantages and disadvantages. While it is extremely easy to use, it is a possibility that these machines will malfunction, and this can cause serious problems for the election process.

Voters can only vote for a certain amount of time until the polls close. In significant states such as Florida, New York and Pennsylvania, the polls close at 8:00 pm Eastern Standard Time. The polls close in states such as Illinois and Texas at 8:00 pm Central Standard Time. These two polling regions are very important for the rest of the country. In an area with a large number of Electoral College points such as California, if voters see a candidate being beaten in the East and Midwest, they will probably elect to vote for someone else.

After a candidate begins to carry some of these states, a forecast will be made by the major news networks projecting that person to be president. In order for a candidate to be officially declared president, he or she must carry 270 of the 539 electoral votes (The Road to 270). At this point, a candidate must begin to form a transition committee in order to take office. The president in this particular election will not be officially inaugurated until January 20, 2009.