Color blindness is the inability to distinguish particular colors. It is generally an inherited trait, but can result from a chemical imbalance or eye injury. There are three primary colors. They are red, blue, and yellow. All other colors are the results of different combinations of primary colors. Special visual cells, called cones, are responsible for our ability to see color. People with normal vision have three different types of cones, each responsible for a different primary color. The absence of particular cones causes the absence of particular colors. This can be one cause of color blindness.

monochromatic vision, or total color blindness, has no cones at all. As a result, they have no ability to see colors, and no hue discrimination whatsoever. Monochromatic vision is very similar to watching a black and white television program.

Somebody with a-typical monochromatic vision has just one type of cone, and can see just one color, and various shades of that color. This form is even rarer than the “typical” monochromatism. Another, more common, form of color blindness is called dichromatism. People with di- chromatic vision tend to confuse red, green, and gray, but can easily distinguish blue and yellow. Some cannot even see the longest wavelengths of light — the red end. Though it is rare, others cannot see the short wavelengths, near the violet end. These people tend to confuse blue, yellow, and gray, but not red and green. Normal vision is called trichromatism. Most color blind people have a version of trichromatism called anomalous trichromatism. People with this condition can see the same colors as people with normal vision, but not as well. For example, many people with this common form of color blindness are “green-weak”. This means, they see green, but to see the same color normal people see when green and yellow is mixed, more green must be added. “Green-weak” and “red- weak” are the most prevalent forms of anomalous trichromatism. The “blue-weak” form is rare. Color blindness can be tested in a variety of ways. The Hardy-Rand-Rittler and Ishihara tests indicate both the type of degree of color blindness. In these tests, a variety of shapes, letters, and numbers lie in a jumbled mess of dots. The dots vary in both color and intensity, which camouflage the shapes. A person’s ability to detect such shapes directly corresponds with their degree of color blindness. 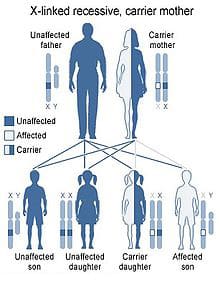 Currently, there is no cure for color blindness. There have been treatments that have failed, but none that have worked. One failed treatment for anomalous trichromatism was color tinted glasses. If you were green-weak, you would wear glasses with a tint of green. There were obvious problem. The first was, everything appeared in shades of your weak color. If you looked through green tinted glasses, your green vision was normal, but all others colors were off.