Conrad Richter’s The Light in the Forest: Summary & Analysis

Conrad Richter presents a historic fictional work describing the colonial frontier in The Light in the Forest. True Son, born as John Butler, was captured by the Lenni Lenape Indians at the age of four. He was adopted by them and raised as the son of their chief, Cuyloga. He became a part of the Indian culture. Later the Indians made a treaty with the whites and all white captives were to be returned to their people, including 15-year-old True Son. However, True Son had learned to hate the white men and their ways.

The Light in the Forest “enlightened” me in various ways. It illustrates the spiritual relationship between Indians and nature as contrasted to 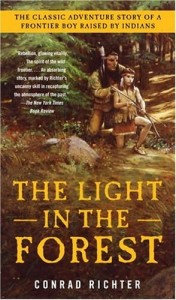 the whites’ attitude. Indians live with nature, appreciating its beauty and enjoying its comfort while whites’ seem to ignore the beauty and value nature only according to its productive usefulness. In The Light in the Forest, whites, for example, cut down the forest and clear land for farming.

I also was intrigued with how True Son spoke of his mother the Earth, his uncle the Moon, and his brother-in-law the Wind. In today’s society we seem to concentrate on technology, while such oneness with nature is almost non-existent.

As an author, Conrad Richter appears to be a skilled writer. I found numerous strengths and only two weaknesses. Ones strength was his use of strong visual images. “What he hungered for most was the sight of an Indian face again-his father’s, deep red, shaped like a hawk’s, used to riding the wind, always above the earth, letting nothing small or of the village disturb him-his mother’s, fresh and brown yet indented with great arching cheek wrinkle born of laughing and smiling, framing the mouth, and across the forehead, horizontal lines like the Indian sign of lightning, not from laughing but from war and talk of war, from family cares and the strain of labor-and his sister’s smooth young moon faces, not pale and sickly like the faces of white girls, but the rich blooming brown of the earth, their lively black eyes looking out from under the blackest and heaviest of hair, always with touches of some bright red cloth that set them off and made them handsome” (p. 53).

Furthermore, Richter chooses point of view wisely. He writes in omniscient point of view, but concentrates on True Son or Del Hardy, balancing the readers knowledge of both Indian and white life styles.

Richter’s presentation is concise. He doesn’t relate events slowly and chronologically, but rather hones in on important situations that reveal character or provide significant information. At the Butler home, for example, the reader doesn’t get tedious detail of True Son from day to day, but rather shows True Son as he meets confrontational Uncle Wilse, visits Bejance, rides to third Mountain, and debates with Parson Elder.

My major criticism of Richter’s style is that he tends to show a bias toward the Indians. The Indians are shown as “noble savages” while the whites are painted as villains. He also seems more intent on examining the causes of violence rather than detailing the methods.

The Light in the Forest provided a great deal of information about early American history in general and Indian customs in particular. The story is set in the 1760’s in the region of Ohio along the Tuscarawas River.

I also learned much about Indian customs. Throughout the book the Indians held many ceremonies where they would try to prove their manhood. They would submerge themselves in freezing cold water and put hot coals in their hand to demonstrate bravery and courage.

I also gained insight about the Indians’ sense of displacement. Cuyloga, for example, resents being displaced from the banks of the Susquehanna and the graves of his ancestors as the white men continued their assault on the frontier.

Furthermore, the book describes medical practices in the middle 1700’s. Bleeding the patient and using medicinal herbs were common practices. On one visit to True Son, Dr. Childsley bleeds the boy’s feet into a gallipot. On another visit he tries to break the fever with strong teas and powders.

The greatest dilemma is that the values of Indians and whites directly contradict one another. The Indian values the open air and the forests, while the white man builds cabins and cuts roadways through the countryside. The Indian holds land as a sacred gift from the Great Being, but the white views the earth as a farmstead capable of profit. White men seem to be cut off from nature by their materialism, greed, and possessiveness.