Every generation has its own heroes that display, what they believe to be, ideal characteristics. While each is different in their own way, many of these role models share similar qualities. Most tend to have courage, strength, compassion, or another respected trait, but this is not necessarily why they win the adoration of their followers. Cyrano De Bergerac is a perfect example of how many protagonists win our allegiance because his sensibilities will not be denied, because he lives life to the hilt, and because he is a victim of his surroundings.

If there was ever a figure who would not be denied his sensibilities, it is Cyrano. When lovers admit, “I’d die for you,” it is usually only a figure 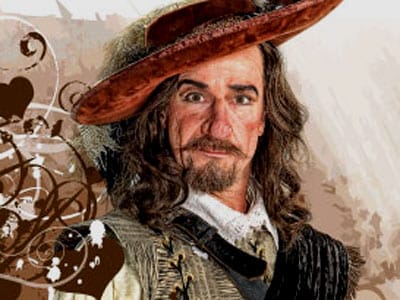 of speech. Cyrano actually crossed over enemy lines every day simply to mail love letters. He also confessed to her, “My mother made it clear that she didn’t find me pleasant to look at. I had no sister. Later, I dreaded the thought of seeing mockery in the eyes of a mistress. Thanks to you I’ve at least had a woman’s friendship, a gracious presence to soften the harsh loneliness of my life. ” When Cyrano admits, “My heart always timidly hides its self behind my mind,” the reader can instantly relate to this dilemma but it is the fact that Cyrano is able to overcome it that makes him a hero.

Not only is Cyrano filled with emotion, but he also goes out of his way to live life to the fullest. Cyrano’s introduction to the reader definitely leaves a lasting impression. Not only does he banish an actor from the theater for performing poorly, but he proceeds to recite poetry while dueling with another member of the audience. Every moment of Cyrano’s life is filled with action like this. When he was informed that one hundred men were going to kill his friend, Ligniére, he was thrilled with the idea of fighting all these men at once, and, of course, he succeeded. How could anyone not love this man who takes Carpe Diem to its most extreme form?

Also, Cyrano is a victim of his surroundings. This may be the one characteristic that completely wins over the reader. Cyrano’s most obvious flaw is his grotesque nose, but this would not be so awful if the people around him didn’t care. Knowing that he is the victim of a problem beyond his control, the reader can do nothing but sympathize with him. The epitome of this is his death. His only wish in life was to dye noble . . .    by the sword, but he again he is hurt by an outside force that he had no influence over. When he says, “Fate is a great jester! I’ve been struck down, but from behind, in an ambush, by a lackey wielding a log! I’ve been consistent to the end, I’ve failed in everything, even in my death,” the reader is completely won over. Perhaps the most impressive thing about those we follow is that they’re human.

Again, Cyrano De Bergerac is the perfect example of how a hero wins the adoration of his followers.  By showing his intense feelings, living life to the fullest, and still remaining human, he is able to win the heart of almost any reader. Heroes have changed a lot over the years. When one looks at napoleon they are hardly reminded of John Lennon. While different generations find different qualities to be noble, there are some heroes, like Cyrano, who will be loved for all time.