Daniel Webster contributed a large portion of the Civil War. To begin, he was born in Salisbury, New Hampshire on January 18, 1782. His parents were farmers so many people didn’t know what to expect of him. Even though his parents were farmers, he still graduated from Dartmouth College in 1801.

After he learned to be a lawyer, Daniel Webster opened a legal practice in Portsmouth, New Hampshire in 1807.  Webster quickly became an 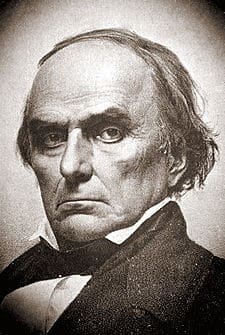 experienced and very good lawyer and a Federalist Party leader. In 1812, Webster was elected to the U.S. House of Representatives because of his opposition to the War of 1812, which had crippled New England’s shipping trade. After two more terms in the House, Webster decided to leave the Congress and move to Boston in 1816.

Over the next 6 years, Webster won major constitutional cases in front of the Supreme Court making him almost famous. Some of his most notable cases were Dartmouth College v. Woodward, Gibbons v. Ogden, and McCulloch v. Maryland. He made himself the nation’s leading lawyer and an outstanding skilled public speaker or an orator. In 1823, Webster was returned to Congress from Boston, and in 1827 he was elected senator from Massachusetts.  New circumstances let Daniel Webster become a champion of American nationalism. With the Federalist Party dead, he joined the National Republican party, he joined with Westerner Henry Clay and then endorsing federal aid for roads in the West. In 1828, since Massachusetts had shifted the economic interest from shipping to manufacturing, Webster decided to back the high-tariff bill of that year to help the small new manufacturing businesses grow. Angry southern leaders condemned the tariff, and South Carolina’s John C. Calhoun argued that South Carolina had the right to nullify or ignore the law. Replying to South Carolina’s Robert Hayne in a Senate debate in 1830, Webster triumphantly defended the Union states by a very powerful but short speech. He said, “Liberty and Union, now and forever, one and inseparable,” made him a favorite and made him well known among many people worldwide.  Webster and President Andrew Jackson joined forces in 1833 to try to change South Carolina’s attempt to nullify the tariff, but Webster and the Whigs battled him on other issues including his attack on the National Bank. Webster ran for the presidency in the election of 1836 as one of the three Whig candidates, but he mostly only Massachusetts voted for him so he lost badly because no one else voted for him.

For the rest of his career he tried very hard to get to the presidency and ran in many elections hoping to get his shot at the office, but it never happened and he failed every time.  In 1841, Daniel Webster came close to his idea of President but was only named secretary. President William Henry Harrison appointed him to this position. When he got killed in April 1841, John Tyler was brought to the presidency. In September 1841, all the Whigs resigned from the cabinet except Webster. He remained to settle an argument with Great Britain having to do with the Maine-Canada boundary and he wanted to finish the Webster-Ashburn Treaty, which he finally did in 1842. The Whigs finally pressured Webster enough so that he would leave the cabinet with everyone else in May of 1843.  The annexation of Texas in 1845 and the war with Mexico, both which, were disliked by Webster, forced the country to face the issue of expansion of slavery. Webster opposed the expansion but feared even more the separation of the union over the dispute of the expansion of slavery. In a powerful speech on March 7, 1850, he supported the Compromise of 1850, lowering southern threats of separation but urging northern support for a stronger law for the recovery of fugitive slaves. Webster was again named secretary of state in July 1850 by President Millard Fillmore and supervised the strict enforcement of the Fugitive Slave Act. Webster’s stand on the Act divided the Whig party, but it helped preserve the Union and keep it together for a little while after until the Civil War started.