Dolphins are mammals closely related to whales and porpoises. Dolphins have a powerful and streamlined body. They are found in all seas and oceans. Dolphins can be told apart from porpoises by their nose, which is beaklike, and also their conical teeth. Porpoises have a flatter nose, sharper teeth, and a more solid body. There are 32 known species of dolphins. The bottle- nosed dolphin is often the species used in aquatic shows. The common dolphin inspired much Mediterranean folk lore. Both of the dolphins above appear in open waters, usually around cruise ships. They like to show off around the boat.  There are also freshwater dolphins that live in rivers of Asia and South America. The Buffeo dolphin has been spotted up to 1250 miles up the Amazon River. The Buffeo is the smallest of all dolphins averaging about 4 feet. The bottlenose is closer to 10 feet. The killer whale, which is also considered a dolphin, can grow to be 30 feet long. The pilot whale is also considered a dolphin.  Dolphins were once hunted by commercial boats for the small amount of oil that can be extracted from their body.

This oil is used to lubricate small parts in watches. Cheaper oils have been found, so dolphins are not hunted for this reason anymore. 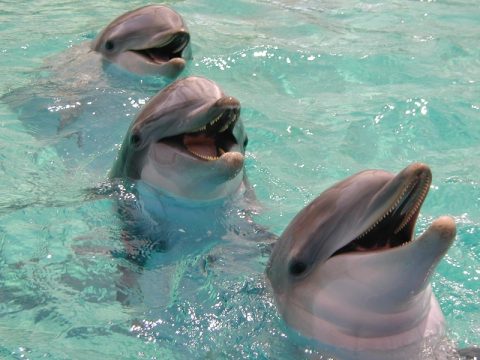 Dolphins can be caught in tuna nets by accident. Since dolphins have to breathe at the surface they drown in tuna nets. It is estimated that 4.8 million dolphins were killed in tuna nets from 1959 to 1972. Under pressure from animal rights activists tuna consumers will not accept tuna from canners that do not protect dolphins. Animal rights activists also believe that dolphins shouldn’t be in captivity for use in aquatic shows. Dolphins eat a lot of food in a day, usually about one third of their body weight. A dolphin’s diet consists of mostly fish and squid. Dolphins can swim very fast, so they are able to easily catch their food. The dolphin has 200 to 250 sharp teeth. Dolphins follow schools of fish in groups. The Pacific white-sided species is estimated to travel in groups with tens of thousands of members, while on the other hand bottlenose dolphins travel in groups that contain only a few members. Dolphin, like whales, breathes through a blowhole in the top of their head. While traveling dolphins break the surface once every two minutes. When dolphins exhale water is sometimes thrown from the blowhole. After exhaling the dolphins inhale and disappear into the ocean. Dolphin’s lungs are adapted to resist the physical problems that are caused by quick changes in pressure. With this adaptation dolphins can dive up to 1000 feet with no problem.  A dolphin’s tail is, like all other aquatic mammals, moves in an up and down motion. Dolphins double fluke their tale to move forward. Their flippers are used to stabilize the dolphin as they swim. A dolphin is very streamlined and can average a speed of up to 19 miles per hour with bursts of over 25 miles per hour. At these speeds, dolphins can cover great distances in a day.

The best studied species of dolphins are the bottle- nosed. Bottle-nosed dolphins reach sexual maturity at the ages of 5 to 12 years in females and 9 to 13 years in males. Dolphins mate in the spring. The dolphins carry the baby, which is called a calf, for 11 to 12 months. At this time a single calf is born, coming out tail first. Calves can swim and breathe minutes after birth. A calf will nurse for up to 18 months. Calves can keep up with their mother by remaining close and taking advantage of its mother’s aerodynamic swimming. Dolphins almost always emit either clicking sounds or whistles. The clicks are short pulses of about 300 sounds per second, which come from a mechanism located just below a dolphin’s blowhole. These clicks are used to locate objects around a dolphin. When the sound of a click bounces off of an object and back to the dolphin, the dolphin uses that information to move without hitting anything. This clicking system is similar to a bats radar system. The whistles are single-toned squeals that come from deep in the larynx. These whistles are used to communicate alarm, sexual excitement, and perhaps other emotions.    Because of dolphin’s ability to learn and perform complex tricks in captivity, their continuous communication with one another, and their ability, with training, to understand a few human words, some scientists think that dolphins could learn a language to communicate with humans. Most experts agree that even though a dolphin’s problem-solving ability is close to that of a primate, no evidence has been shown that dolphin’s communication skills even come close to the complexity of a true language. All dolphins belong to the order of Cetacea. The bottle-nosed dolphin is scientifically classified as Tursiops truncatus. The common dolphin is classified as Delphinus delphis, and the buffeo dolphin is classified as Sotalia fluviatilis. The killer whale is classified as Orcinus orca and the white- sided dolphin is classified as Lagenorhynchus obliquidens.