The Branta sandvicensis, or Hawaiian goose looks similar to the Canada Goose except only the face, cap, and hindneck are black; and Nene have buff-colored cheeks.  The males and female have the same plumage.  The feet of this goose are not completely webbed like the other geese.  Lots of calls have been described but the most common call is very similar to that of the Canada Goose, a resonate “honk.”  The goose has very strong toes; long legs, decreased webbing. They are good swimmers but are not found much near water.  The birds nest on the ground and the young can fly at 1012 weeks.  The adult Goose cannot fly while in molt for 46 weeks.

Wild Nene populations can be seen in Hawaii Volcanoes National Park, Mauna Loa, and Pu’u Wa’awa’a on the island of Hawaii; in Haleakala 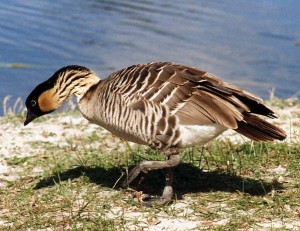 National Park on Maui; and at the Kilauea National Wildlife Refuge, along the Na Pali coast and outside Lihue on Kauai.  Captive Nene can be seen at he Honolulu Zoo.

Designated Hawaii’s State Bird on May 7, 1957, the Nene has endured a long struggle against extinction.  During the 1940s this species was almost wiped out by laws which allowed the birds to be hunted during their winter breeding seasons when the birds were most vulnerable.  By 1957, when the Nene was named the State Bird, rescue efforts were underway.  Conservationists began breeding the birds in captivity in hopes of preserving a remnant of the declining population and, someday, successfully re-establishing them in their native habitat.  Other programs for returning captive birds to the wild life was difficult, but more efforts have been successful. Some other efforts used to help this bird have been to get donations for the bird and have schools help out by donating money to organizations. There are now small populations of Nene on the islands of Hawaii, Maui, and Kauai. There are about 1000 Nene outside of Hawaii’s zoos, and private collections.

The Nene is currently on the Federal List of Endangered Species, threatened by mongooses and dogs and cats which prey on the Nene’s eggs and young.   They are also endangered by human intrusion of the environment.