The manatee popularly called the sea cow is any of the species of large water animals in the genus Trichechus. There are three species of manatee with T. inunguis found in the Amazon and Orinoco river systems; T. manatus is found in central Florida and along the Gulf of Mexico and Caribbean coasts; and T. senegalenis found in the rivers of tropical West Africa.  A manatee is a slow moving, seal 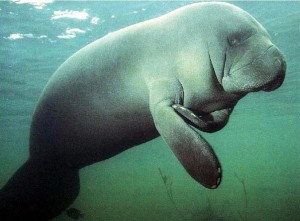 shaped mammal that lives in shallow coastal waters where rich plant grows. It usually is at home in salt or fresh water but rarely straying far from home.

A manatee is grayish-black stout thick skinned animals and almost hairless. Its corpulent body tapers to a horizontally flattened, round tail. The fore limbs are set close to its head and are used to push algae, such as seaweed and other water plants toward their mouths.  They have a small head, with a straight snout and cleft upper lip with bristly hairs.  Adults can grow up to 15ft (4.6 meters) but they usually only grow to about 10 feet.  They weigh an average of 1300 pounds. Manatees live in small family groups sometimes up to herds of 15-20.  After a gestation of up to 6 months, usually a single pinkish calf is born.  Manatees ferquently communicate by muzzle to muzzle contact and when alarmed they emit chripy squeaks. The number of manatees has been reduced over the past several years due to heavy hunting for their hides, meat, and blubber oil.  Some governments, including the United States, have placed the manatees under the endangered species list. One practical reason for this is that they have proved useful in clearin girrigation and transport channels clogged with aquatic plant life. There has also been an increase in manatee death due to passing boats that speed through channels. If we all do not help protect these sea cows today then they will not be around for future generations to enjoy.  Everyone must do their part in protecting these mammals of the ocean.

READ:
History of our Species and Violence