The ban on elephant ivory trading has slowed down the poaching of elephants, but now poachers are getting their ivory from another creature, the hippopotamus.  For the poacher, the hippo is an easy target.  They stay together for long hours in muddy water pools, as many as eighty-one can be found in a single square mile. This concentration is so big it’s only second to that of the elephant.  Poachers kill the animal, then pick out the teeth and sell them for as much as seventy dollars per kilo. This is a very cheap price. Elephant ivory sells for as much as five-hundred dollars per kilo.  The reason the price-per-kilo is so slow is because hippo ivory is very brittle compared to the much stronger elephant ivory.  Elephant ivory is no longer at the biggest risk for poaching; hippo ivory is.  Eastern Zaire once had one of the largest hippo populations in the world, around 23,000 hippos. 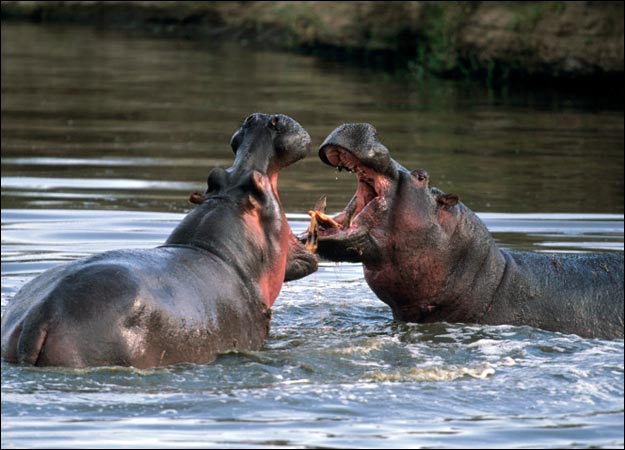 the exponential rise to hippo ivory trade.  “European and African activists are petitioning advocacy groups, including last week’s annual Convention on International Trade in Endangered Species in Florida, for a ban on hippo poaching.  But they say they’re a long way from putting an end to the slaughter.” (Howard & Koehl)  The hippopotamus is an enormous amphibious animal with smooth, hairless skin.  Hippos can be found in Liberia, the Ivory Coast, and a few can also be found in Sierra Leone and Guinea.  Hippos used to be found anywhere south of the Sahara Desert where they could find enough water and plenty of room to graze.  Now, due to poachers and predation they are confined to protected areas, but they can still sometimes be seen in many major rivers and swamps.  Hippos need water that is deep enough to cover them, but it also has to be very close to a pasture.  They must wallow in the water because their thin, hairless skin is vulnerable to overheating and dehydration.  Hippos were once thought to sweat blood.  Actually, hippos secrete a pinkish colored oil that helps them keep their skin moist in the hot African climate.  Hippos are herbivores.

They prefer the short grass of African plains to any other possible food.  They normally eat up to eighty-eight pounds of this grass nightly, which they mow away a large patch at a time with their twenty-inch muscular lips.  Hippos spend most of their days in the water or wallowing in the mud, only coming up on land to feed at night. Hippos defecate in the water.  Their dung provides essential basic elements for the food chain. Tiny microorganisms feed on it and then larger animals feed on those organisms.  On land, hippos’ large bodies make trails through the vegetation that other animals may use for easy access to water holes.  Because hippos’ favorite food is short grass, they keep these grasses well-trimmed which may help to prevent grass fires.  Hippos are an important part of the African ecosystem.  If the hippos become extinct, and the likelihood grows more and more each day, the repercussions it may have on the fragile African ecosystem are tremendous.  Imagine a brush fire consuming acres of previously-livable land under the hot African sun.  These people have no way to put out fires like we do here in the U.S.. The fires in California were barely maintainable. In short, if the hippos die, everything dependent on the hippo and it’s way-of-life also suffers.