We want more than a mere photograph of nature. We do not want to paint pretty pictures to be hung on drawing-room walls. We want to create, or at least lay the foundations of, an art that gives something to humanity. An art that arrests and engages. An art created of one’s innermost heart.” (E.M.)

Edvard Munch was born December 12, 1863 in Loten, Norway. He was one of five children born to Christian Munch, a military doctor, and his

wife Catherine. Munch’s life was always filled with death and morbidity. In 1868, his mother died of tuberculosis. In 1877, his younger sister Sophie also died of tuberculosis. Many of his pictures of death rooms, sick and dead children, and sick and dead mothers were inspired by the illness, death, and grief that had haunted him in his early years.

Edvard himself was also often ill. Edvard entered a technical college to become an engineer in 1879, but frequent illness drove him away. In 1880 he decided to leave school to study painting. The next year, he enrolled in the Royal School of Art and Design where he painted his first self-portrait.

For a time, Norway’s leading artist, Christian Krohg, instructed Edvard. At that time Edvard also was greatly interested in French Realism, which one can see traces of in his early works. In 1885, Munch went to Paris to study. There he began a work called The Sick Child, which soon would be his breakthrough. In it he made a radical break with the realistic approach of the time. The picture was about his sister Sophie, and her death from Tuberculosis. Munch struggled with the interpretation of his experience, and the pain and personal meaning that it held. Finally, he finished a coarsely textured, laborious picture. The critics were harsh, and for a time after that his works were less provocative, and more in tune with the times.

In 1889, his father died. Shortly thereafter, he painted Night. That same year, he organized an exhibition of one hundred and ten works in the Student Organization in Christiania (modern day Oslo). He also began to work on The Scream. In 1892, Edvard was invited by the Union of Berlin Artists to exhibit at its November exhibition. However, Munch’s paintings were the object of bitter controversy, and after one week the exhibition was closed.

Edvard produced his first etchings and lithographs in 1894. That same year, Przybyszewski published the first publication about Munch’s art, which he characterized as ‘psychological realism.’ A year later, Munch moved back to Berlin, then in 1896 back to Paris. There he concentrated on graphic mediums, at the expense of his paintings. He produced elaborate color lithographs, and began to produce woodcuts in partnership with the famous printer Auguste Clot.

In 1904 Munch joined the Berliner Secession. He also was drinking heavily at that time. In 1908, he exhibited with Die Brucke, shortly after which he had a complete nervous breakdown. He spent eight months in a mental clinic rehabilitating. He moved back to Norway in 1909, where he lived out the rest of his life. After he moved back, he showed much more of an interest in nature in his work, and he became less pessimistic and more colorful. He entered a competition to decorate the University of Kristiania’s new auditorium, the Aula, which he won after some debate. His designs were installed in 1916, three years after he resigned from the Berlin Secession. That year he bought a house outside of Kristiania, in a town called Ekely. There he lived, becoming more and more isolated. 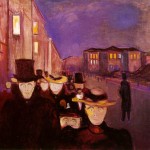 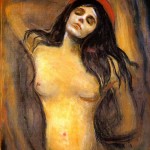 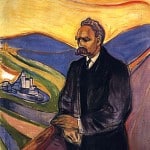 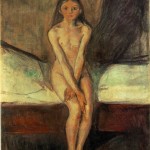 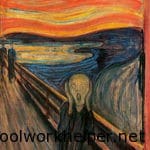 In 1917, Curt Glaser wrote and published a book called ‘Edvard Munch.’ In 1928, he discovered he had cysts in his right eye, and five years later a broken blood vessel in his right eye caused almost total blindness. When the Nazis invaded Norway in 1940, Munch refused all contact with them, though they tried. Munch died peacefully at home on January 23, 1944. In his will, he bequeathed 1,000 paintings, 15,400 prints, 4,500 drawings and watercolors, and six sculptures to the city of Oslo, formerly Kristiania.