Of Dogs was written by Elizabeth Thomas who is currently well known and highly respected for her books. Elizabeth Thomas was born in America and currently lives in New Hampshire. This is a book that is unlike any book ever written as it takes the perspective from a different angle. It was first published in the United States in 1993 by Houghton Mifflin Company.

Elizabeth has written five books, all bestsellers. It is evident that her success is due to her intense research as she has travelled the 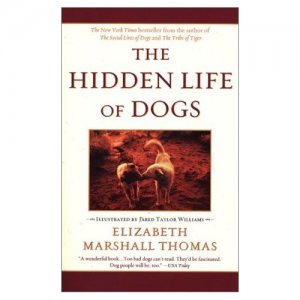 world while writing her books. With international success, Elizabeth plans to continue her career that currently seems to be skyrocketing.

“The Hidden Life Of Dogs” was not just any book. Clearly there was much more effort involved. Beginning with an introductory character, Misha who was a Husky, began the book well. This book tried to get the idea across that humans knew only very little about dogs and their patterns. After intense observations on Misha, some ideas were brought up. How did the dog know how to cross a highway on its own? How did its navigational skills work? How was it that this dog knew exactly where it was and could travel through different cities without becoming lost and other dogs couldn’t? Continuing on to bringing in other dogs Elizabeth was studying, she pointed out that some had skills that others did not. Misha was clearly able to navigate himself but when with another dog, he would become lost. After careful observation it was seen that the other dog could easily lose track of where she was and mislead Misha. Another interesting topic covered is how dogs behave with each other. How they achieve their social status, why some dogs don’t become accepted and how they react to each other. By comparing the dogs with the wolves and dingoes some of the dogs’ actions become clearer, but there is one thing a dog really wants and that is to be with others, and to love their owner. It was explained how a dog defended a bird and mouse in a cage from another excited dog in the same house. Likely explanations for this could be because the older dog felt that the peace was not being maintained or perhaps he knew that the mouse and bird were his master’s belongings and he should protect them. The book goes on to explaining what occurs between the dogs when they mate, why some dogs kill their litter and many other topics. The conclusion is quite brief, Elizabeth explains what happens to her dogs, how a dog feels when her best mate dies and the relationship her dogs had with the wolves and coyotes and their interactions.

Each single chapter of this book brings up a new issue and investigates it. The interest is maintained throughout the book purely because of the fascinating information given about this species, information that had not been studied before. The author also wrote in a clear cut way, giving a solid and adequate description of everything and then moving on to new parts, not making it boring.

Very few illustrations are used in the book, only one in the beginning of each chapter. Illustrations in this book would have little use as there is no way of really describing every action made by the dogs. Instead of illustrating, the book kept the text clear, not making it confusing but easy to understand and illustrate in the mind.

In general, the book was at an excellent standard, very easy to read, not too long and no major confusions. These small details made the book enjoyable to read as well as being useful information. The book’s purpose, to give humans better knowledge about our close friend, did just that. It achieved to show that the dog can be misunderstood for being stupid when really it knows much more than we think it does. Clearly many tiring and endless hours have been put in to make this book a success and how it was done is really amazing. Elizabeth looked after more than twenty dogs, spent all her spare time observing them, walking with them until she saw why they did what they did. The hidden life of dogs was a great book that would keep any reader at any age occupied and entertained.