Only at the beginning of the book, the story is located in England, but later all the events are transferred to Africa. The actions of The 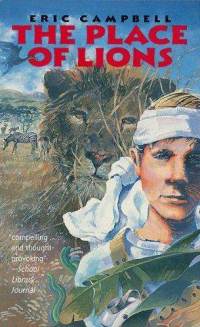 Place of Lions develop mostly in Serengeti Plain, Tanzania, in a savannah full of wild animals and danger. In the book there is not showed the exact year where the story develops, but because of the descriptions, this story was developed at the 90s.

The main character is Chris Harris, a 14 year old boy whose mother died a few years ago. He seems mature for his age, and his best friend at school is Henry, the caretaker. Chris’ father grieves the loss of his wife and depends on his son for strength and moral support. Chris changes along the novel; he becomes more mature and responsible. Other important characters in the book are: Mike Taylor, a safari guide, Hyram T. Johnson, an American safari tourist, an air pilot, a band of poachers and last, an old lion preparing to die.

Chris’ hometown in the beginning of the book is London, England, but his father receives a package that informs him that his new job will be located in Tanzania, Africa. Chris then finds himself on a plane, headed for Tanzania. Chris is amazed to find the beauty of Africa breath-taking and starts his curiosity about the mysteries of Africa. Chris and his father travel to the New Safari Hotel in Arusha, Tanzania. There, Chris meets a hard-core naturalist by the name of Mike Taylor. Chris is amazed by Mike’s determination to save and protect the wildlife in Africa, and is hoping to see him again. To get to their full destination, Chris and his father must take another plane trip across the Serengeti. During the plane trip, the plane crashes into a flock of vultures. In an instant, the plane is down leaving Chris as the only one not injured by the crash, right in the middle of the territory of a pride of lions. The older male is being challenged by a young one and only barely manages to maintain his supremacy after a fierce battle.

Using his wit and strength, Chris must make his way across the perilous Serengeti, while being watched by a proud, prowling pride of vicious lions. Chris soon learns that he must travel to the village nearby armed with only a canteen half filled with water to get help. Chris decides to walk 30 miles to a site where he believes he can find help. Not only natural dangers stand between him and the nearest settlement; there’s also a deadly pair of ivory poachers, who are surprised in action and vengefully chased by an American and a retired game warden who’s there on a photographic safari; an aging lion, undertaking his last journey, also closely parallels Chris’s course.

The poachers find Chris but first drive away and then decide to kidnap him. Chris has been followed across the plain by the old, dying lion and a mysterious connection has been made as both head for a hill where the lion hopes to die and Chris hopes to find help.

The English author Eric Campbell has spent most of his working life in Papua New Guinea and in Tanzania. He has written several novels from exotic places that he knows well, such as “Papa Tembo”, about an elephant in Africa, and “The Call of the Whales”, which events develop in New Zealand.

Throughout this book Eric Campbell used many different types of writing styles. The one style that he especially used was that of sensory images. Eric Campbell used sensory images countless times to describe important events in the book. He also used a wide stretch of vocabulary and figurative language, (similes and metaphors). One thing that I thought Eric Campbell should have done was to explain what happened to the pilot and Chris’ father while Chris set out to take on the Serengeti. The narrative shifts fairly smoothly from Chris’s point of view to the lion’s, and also follows the actions of Mike Taylor, a tour guide who is pursuing poachers in the same region. The novel is full of vivid descriptions of the life and land of Africa, although at times the flowery prose disrupts the flow of the story. The opening chapters that lead up to the plane crash are rather slow, but after that the pace is fast and the story compelling. Chris shows bravery and ingenuity throughout his adventure, but never comes fully alive as a character.  While other survival stories focus more on the growth and development of the hero, The Place of Lions is more concerned with the environment. Overall, the exciting action in a fascinating setting, coupled with the intriguing spiritual element, make this a worthwhile and thought-provoking book The point of view of the narrator varies. Most of the story is told from Chris’ point of view, but some parts are told from the point of view of the safari guide, others from that of the lion.