The setting changes all throughout the book as Raptor Red migrates from one place to another. In some settings she is in thick rich mossy 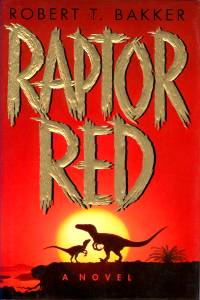 forests looking for plump Iguanodons to eat, to other desert like lands where the sun is so hot she must sleep through the midday and hunt late afternoon when the heat is bearable. Setting is a very important because the author must reconstruct the crustaceous period setting and all the vegetation, lust forests, muddy salt flats, sandy beaches, and dry temperate valleys. These settings are all very vital to the book because it creates the prehistoric atmosphere and brutal planet these giants once inhabited. One of the key elements to the book to make it more realistic is how the author describes in detail all the other animals that Raptor Red hunts and runs into in the book. The author puts great detail in how Raptor Red stalks her prey and kills her victims. Once you start reading this book and you see how intelligent raptors once were you really can’t decipher Raptor Red’s thinking to a modern day human hunter.

This book follows the life of Raptor Red and all the troubles a raptor would face in its life from good times to bad. The book starts off with Raptor Red hunting an Ultrasaurus with her mate. They carefully select the dinosaur they will single out to kill. They look for faults in their prey, like injuries, preoccupation with something else, stragglers who want to rest for a while, just about anything to help assure a safe victory without any injuries to themselves. Raptor Red and her mate single out an Ultrasaurus who is preoccupied with trying to mate rather than pay any attention to the fact that it was being stalked by predators. Raptor Red and the mate kill the Ultrasaurus on a mud flat, and the Ultrasaurus falls on its knees and dies. While Raptor Red and her mate are gorging on the large animal her mate detects a scent of another kind of s raptors in the area that want some of the kill. Raptor Reds mate lets out a fierce roar and a stomp to scare away the smaller raptors. But when he stomped in the mud next to the Ultrasaurus it falls over in top of him, pinning him under the Ultrasaurus. The heavy Ultrasaurus slowly sinks deeper into the mud trapping Raptor Reds mate under it until her mate drowns slowly in the mud. Raptor Red is devastated and sits next to the Ultrasaurus carcas her mate is trapped under for 36 hours, until it sets into her she must accept reality and move on. Now Raptor Red must start a new life, and find more Utah Raptors like herself so she can join a new pack and have other Raptors to socialize with.