Several different religions involve spirits in their beliefs; animism and shamanism are two of many. Though these two tribal religions have some beliefs in common, such as the spirits’ power over the physical world, they also differ greatly. The shamanistic beliefs about the spirit world, spirits themselves and the power of man over spirits are all in contrast to animistic beliefs. Animists believed that they could only appease spirits,[1] while shamanism believed that one could persuade spirits to do their bidding.[2] Animism is regarded by many as the root from which all religions formed,[3] though there is not enough concrete evidence to make this a fact. It is also defined as the worship of spirits opposed to that of gods.[4] Shamans could use their power to curse people, and were rarely crossed because of this.[5] Both shamanism and animists thought that the spirit left its body when its owner fell asleep, and that dreams were what the spirit did while out of the body. If, for some reason the spirit did not return by morning, its body would be found dead.[6] This was usually permanent, however if a shaman or witch doctor (both were essentially the same thing) happened to be in the area, he could be called upon to bring the spirit back. The process involved a branch with leaves; the shaman waved the branch around until he “caught” the spirit in the tangle of the leaves. He then hit the lifeless body on the head with the branch. This was meant to force the spirit back into its body.[7] It is unclear whether this process worked or not, however it is highly likely that demons were involved in many shamanistic practices, and were the cause of most animistic beliefs. Neither religion had an established church, nor do they have a holy book.[8] While animists had no central religious leader, shamanism had their shamans leading them, causing shamanistic beliefs to vary.[9] Although similar, shamanism and animists both had differences in their beliefs.

The spirit world was very real for both religions. However, their interpretations differed from each other. Animists believed that spirits could physically harm the living if they so desired. Before burying the body of one of their dead friends or enemies, animists would slice the bottom of 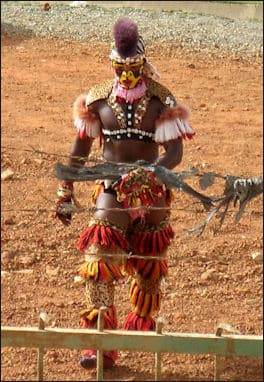 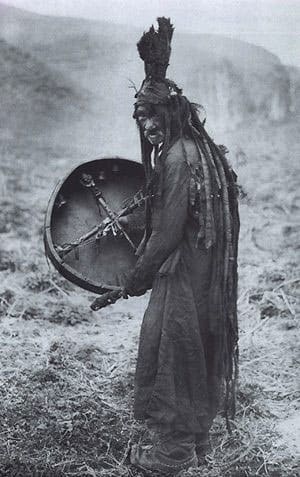 the corpse’s feet. This, to the animists, disabled the spirit in the body, as they believed that it would affect the spirit’s body, rendering it harmless to them.[10] When an animal was caught in a trap laid by a hunter, the hunter would call out to the animal, placing the blame on something or someone else so the animal’s spirit would not come to him for vengeance.[11] Animists also offered food to spirits[12] for the same reason that the hunters called out; they were afraid of them. Animists were not surprised when the food they offered was not touched by a spirit, they believed that the food had its own presence in the spirit world, and therefore could be eaten there.[13] Shamanism also believed that food had its own spirit; however they did not believe that spirits would harm them. Shamans were the spiritual leaders in their village or tribe, and often received knowledge from spirits, rather than harm.[14] The spirit world was a peaceful place for shamans. Thus, Shamanism and animists believed the spirit world was real, but disagreed on how safe they were from it.

Shamans were their tribe’s doctors as well as spiritual leaders. If a member of the tribe or village that the shaman was in needed spiritual guidance, or needed mental help, the shaman would mix two plants together. Ayahuasca, which made whoever ingested it nauseous, and chacruna, a hallucinogen that provoked visions. Once these two plants had boiled together for ten hours, the shaman would have his patient drink the solution. After the visions started, the shaman began chanting, guiding his patient through his or her visions as he did. This method brought people to the spirit world, and increased the brain’s serotonin level, an antidepressant. Shamans used this ritual on themselves to contact spirits and ask for their knowledge.[15] Artifacts found in Britain dated back to 2500 B.C. suggest that shamans wore jewelry,[16] possibly to show their social status, or to make better contact with the spirit world. A shaman had the power to heal and guide his tribe members by having them visit the spirit world.

Animists believed that most spirits were malevolent, and would cause disturbances, or kill one of the living unless they worshiped or made offerings to the spirits.[17] If a rock fell on someone’s head, or even if a plant’s shadow moved, they believed it was a spirit’s doing.[18] This was another of the reasons that a dead man’s feet would be cut up before burial, and why they offered food to spirits. When a man died, a shrine would be built to honor his spirit. Friends and relatives would visit the shrine often.[19] Shamans believed that most spirits were either kind at heart, or did not pay much attention to the living.[20] Spirits shared knowledge with the shamans. However, shamans were always careful about what they said to spirits. They would not invite a spirit into their body, and warned others not to do so, as that could have led to possession.[21] Though they did not set up a shrine and worship spirits, shamans did have rituals for entering the spirit world. The ritual would begin with a girl having patterns painted on her face; members of the tribe would begin chanting. After her face was painted, a shaman would begin cutting her hair, and the girl would be in contact with the spirit world. Then, an animal would be sacrificed and brought to a sacred area. Everyone would then make contact with the spirit world, and the ritual would end soon after.[22] This shows how differently animists and shamans thought about the spirits. Animists worshiped and feared spirits, while shamans spoke to and honored spirits.

Animists also believed that spirits could become gods, and take residence in this world. When a shrine dedicated to a spirit was worshiped often, beliefs could develop that the spirit the shrine was dedicated to must have been a god.[23] Soon, the entire village would praise the spirit. Animists also believed that if a tree moved without anything to move it, then a god must have taken residence in the tree and it was announced sacred. They worshiped the tree immediately.[24] Shamans had no such practice. So, animists worshiped some spirits as gods.

Animists thought that men were superior to women, and that a man should take his belongings to the afterlife[25], while shamans believed the opposite. When a man died, his wife and servants would be buried alive with his corpse so they may serve him in the spirit world.[26] This continued for quite a while before animists realized that should not have been done. Shamans did not take part in anything like that. Indeed, there were female shamans, according to Chinese literary texts dated back to 1766-221 BC.[27] This shows that shamans had some respect for women, while animists did not.

While shamans sought to share their beliefs, animists stayed put. Evidence from 300-900 AD in Europe shows that Anglo-Saxons and Vikings employed shamans before converting to the shaman religion.[28] Animists did not seek to share their religion. However over half of the world had an animistic based belief.[29] Therefore, shamans had more of a missionary mindset than animists did.

Most shamanistic and animistic beliefs differed greatly, yet some were almost identical. Both were tribal religions who shared the belief that the spirit could leave the body when they were sleeping.[30] Neither religion had a holy book or an established church.[31] Despite these similarities, shamanistic and animistic beliefs contradicted one another. Animists believed that spirits should have been feared, offered sacrifices to, and worshiped.[32] Shamanism believed that spirits should have been respected and honored.

Animists thought that spirits would harm the living if they were not appeased, while shamanism thought the spirits would share valuable knowledge with them.[33] Certain spirits were worshiped as gods by animists,[34] but shamanism did not think of spirits as deities. Shamans had missionary mindsets, traveling the world spreading their religion.[35] Animists were content to stay where they were and fear spirits. Females were allowed to become shamans; some did.[36] It is highly unlikely that women were allowed places of power in animistic tribes. Though animistic and shamanistic beliefs have common ground, these two religions differ greatly enough to call them completely different from each other. To sum up, shamanism and animism have few beliefs in common when compare to how different they are.

[1] Clodd, Edward. “Naturalism; or Conception of Power Everywhere.” In Animism the Seed of Religion, L.219.

[10] Gilmore, George. “The Continued Existence of the Soul.” In Animism Or, Thought Currents of Primitive Peoples, L.79.

[17] Clodd, Graham. “Deification and Worship of Ancestors.” In Animism the Seed of Religion, L.807.

[18] Gilmore, George. “Death of the Suma Snake.” In Animism Or, Thought Currents of Primitive Peoples, L.6.

[19] Clodd, Graham. “Deification and Worship of Ancestors.” In Animism the Seed of Religion, L.833.

[23] Clodd, Graham. “Deification and Worship of Ancestors.” In Animism the Seed of Religion, L.857.

[29] Clodd, Graham. “Deification and Worship of Ancestors.” In Animism the Seed of Religion, L. 886.

31 Clodd, Graham. “Deification and Worship of Ancestors.” In Animism the Seed of Religion, L.807.

34 Clodd, Graham. “Deification and Worship of Ancestors.” In Animism the Seed of Religion, L.857.

Who wrote this? An excellent observation and distinction.